Does Penumbra Inc (NYSE:PEN) represent a good buying opportunity at the moment? Let’s quickly check the hedge fund interest towards the company. Hedge fund firms constantly search out bright intellectuals and highly-experienced employees and throw away millions of dollars on satellite photos and other research activities, so it is no wonder why they tend to generate millions in profits each year. It is also true that some hedge fund players fail inconceivably on some occasions, but net net their stock picks have been generating superior risk-adjusted returns on average over the years.

Is Penumbra Inc (NYSE:PEN) worth your attention right now? The smart money is reducing their bets on the stock. The number of bullish hedge fund positions decreased by 1 recently. Our calculations also showed that PEN isn’t among the 30 most popular stocks among hedge funds.

In today’s marketplace there are several formulas stock traders put to use to assess their stock investments. A pair of the most underrated formulas are hedge fund and insider trading moves. We have shown that, historically, those who follow the top picks of the elite hedge fund managers can beat the market by a solid amount (see the details here).

Unlike this former hedge fund manager who is convinced Dow will soar past 40000, our long-short investment strategy doesn’t rely on bull markets to deliver double digit returns. We only rely on hedge fund buy/sell signals. We’re going to take a look at the new hedge fund action encompassing Penumbra Inc (NYSE:PEN).

What does smart money think about Penumbra Inc (NYSE:PEN)?

Heading into the third quarter of 2019, a total of 19 of the hedge funds tracked by Insider Monkey were long this stock, a change of -5% from one quarter earlier. On the other hand, there were a total of 24 hedge funds with a bullish position in PEN a year ago. With the smart money’s positions undergoing their usual ebb and flow, there exists a select group of noteworthy hedge fund managers who were upping their stakes meaningfully (or already accumulated large positions). 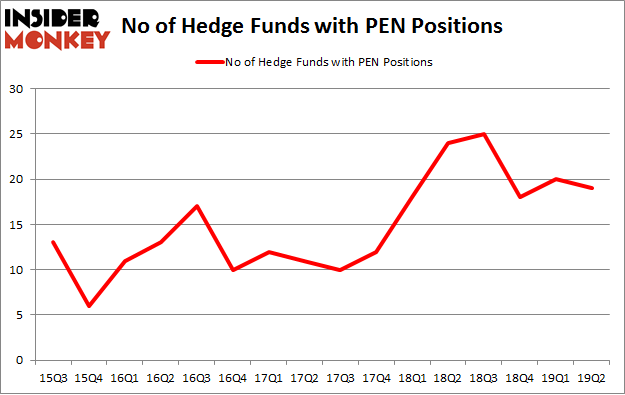 The largest stake in Penumbra Inc (NYSE:PEN) was held by Partner Fund Management, which reported holding $123.5 million worth of stock at the end of March. It was followed by Millennium Management with a $49.3 million position. Other investors bullish on the company included Rock Springs Capital Management, D E Shaw, and Citadel Investment Group.

Due to the fact that Penumbra Inc (NYSE:PEN) has witnessed bearish sentiment from the entirety of the hedge funds we track, it’s easy to see that there lies a certain “tier” of funds who sold off their positions entirely heading into Q3. It’s worth mentioning that Jeremy Green’s Redmile Group said goodbye to the largest position of the “upper crust” of funds tracked by Insider Monkey, comprising about $47.5 million in call options. Israel Englander’s fund, Millennium Management, also dropped its call options, about $10.3 million worth. These transactions are intriguing to say the least, as total hedge fund interest was cut by 1 funds heading into Q3.

As you can see these stocks had an average of 22 hedge funds with bullish positions and the average amount invested in these stocks was $323 million. That figure was $294 million in PEN’s case. Wyndham Hotels & Resorts, Inc. (NYSE:WH) is the most popular stock in this table. On the other hand Millicom International Cellular S.A. (NASDAQ:TIGO) is the least popular one with only 5 bullish hedge fund positions. Penumbra Inc (NYSE:PEN) is not the least popular stock in this group but hedge fund interest is still below average. This is a slightly negative signal and we’d rather spend our time researching stocks that hedge funds are piling on. Our calculations showed that top 20 most popular stocks among hedge funds returned 24.4% in 2019 through September 30th and outperformed the S&P 500 ETF (SPY) by 4 percentage points. Unfortunately PEN wasn’t nearly as popular as these 20 stocks (hedge fund sentiment was quite bearish); PEN investors were disappointed as the stock returned -15.9% during the third quarter and underperformed the market. If you are interested in investing in large cap stocks with huge upside potential, you should check out the top 20 most popular stocks (see the video below) among hedge funds as many of these stocks already outperformed the market so far in 2019.