The Insider Monkey team has completed processing the quarterly 13F filings for the June quarter submitted by the hedge funds and other money managers included in our extensive database. Most hedge fund investors experienced strong gains on the back of a strong market performance, which certainly propelled them to adjust their equity holdings so as to maintain the desired risk profile. As a result, the relevancy of these public filings and their content is indisputable, as they may reveal numerous high-potential stocks. The following article will discuss the smart money sentiment towards ING Groep N.V. (NYSE:ING).

ING Groep N.V. (NYSE:ING) shareholders have witnessed a decrease in activity from the world’s largest hedge funds of late. ING was in 8 hedge funds’ portfolios at the end of June. There were 10 hedge funds in our database with ING positions at the end of the previous quarter. Our calculations also showed that ING isn’t among the 30 most popular stocks among hedge funds (see the video below).

According to most traders, hedge funds are viewed as underperforming, old financial tools of the past. While there are over 8000 funds in operation at present, We look at the aristocrats of this club, around 750 funds. It is estimated that this group of investors administer the majority of the hedge fund industry’s total capital, and by following their unrivaled stock picks, Insider Monkey has determined several investment strategies that have historically outstripped the broader indices. Insider Monkey’s flagship hedge fund strategy beat the S&P 500 index by around 5 percentage points per annum since its inception in May 2014. We were able to generate large returns even by identifying short candidates. Our portfolio of short stocks lost 25.7% since February 2017 (through September 30th) even though the market was up more than 33% during the same period. We just shared a list of 10 short targets in our latest quarterly update .

Unlike some fund managers who are betting on Dow reaching 40000 in a year, our long-short investment strategy doesn’t rely on bull markets to deliver double digit returns. We only rely on hedge fund buy/sell signals. We’re going to take a gander at the new hedge fund action encompassing ING Groep N.V. (NYSE:ING).

At the end of the second quarter, a total of 8 of the hedge funds tracked by Insider Monkey were bullish on this stock, a change of -20% from the first quarter of 2019. On the other hand, there were a total of 8 hedge funds with a bullish position in ING a year ago. With the smart money’s capital changing hands, there exists a select group of notable hedge fund managers who were increasing their stakes substantially (or already accumulated large positions). 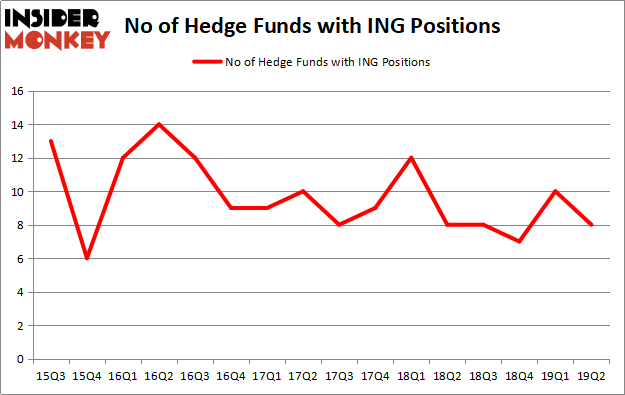 According to publicly available hedge fund and institutional investor holdings data compiled by Insider Monkey, Fisher Asset Management, managed by Ken Fisher, holds the number one position in ING Groep N.V. (NYSE:ING). Fisher Asset Management has a $417.5 million position in the stock, comprising 0.5% of its 13F portfolio. The second most bullish fund manager is William B. Gray of Orbis Investment Management, with a $8.4 million position; 0.1% of its 13F portfolio is allocated to the stock. Remaining members of the smart money with similar optimism comprise Ken Griffin’s Citadel Investment Group and John Overdeck and David Siegel’s Two Sigma Advisors.

Because ING Groep N.V. (NYSE:ING) has witnessed declining sentiment from the entirety of the hedge funds we track, we can see that there exists a select few fund managers that slashed their positions entirely by the end of the second quarter. Intriguingly, Renaissance Technologies said goodbye to the largest position of all the hedgies monitored by Insider Monkey, valued at an estimated $3.5 million in stock, and Matthew Hulsizer’s PEAK6 Capital Management was right behind this move, as the fund cut about $3 million worth. These moves are intriguing to say the least, as total hedge fund interest was cut by 2 funds by the end of the second quarter.

As you can see these stocks had an average of 33 hedge funds with bullish positions and the average amount invested in these stocks was $1460 million. That figure was $430 million in ING’s case. Micron Technology, Inc. (NASDAQ:MU) is the most popular stock in this table. On the other hand Banco de Chile (NYSE:BCH) is the least popular one with only 6 bullish hedge fund positions. ING Groep N.V. (NYSE:ING) is not the least popular stock in this group but hedge fund interest is still below average. This is a slightly negative signal and we’d rather spend our time researching stocks that hedge funds are piling on. Our calculations showed that top 20 most popular stocks among hedge funds returned 24.4% in 2019 through September 30th and outperformed the S&P 500 ETF (SPY) by 4 percentage points. Unfortunately ING wasn’t nearly as popular as these 20 stocks (hedge fund sentiment was quite bearish); ING investors were disappointed as the stock returned -7.2% during the third quarter and underperformed the market. If you are interested in investing in large cap stocks with huge upside potential, you should check out the top 20 most popular stocks among hedge funds as many of these stocks already outperformed the market so far in 2019.