FedEx Corporation (NYSE:FDX) was in 41 hedge funds’ portfolios at the end of the fourth quarter of 2018. FDX has seen a decrease in enthusiasm from smart money lately. There were 42 hedge funds in our database with FDX holdings at the end of the previous quarter. Our calculations also showed that FDX isn’t among the 30 most popular stocks among hedge funds.

We’re going to take a peek at the fresh hedge fund action regarding FedEx Corporation (NYSE:FDX).

At Q4’s end, a total of 41 of the hedge funds tracked by Insider Monkey were bullish on this stock, a change of -2% from the previous quarter. On the other hand, there were a total of 47 hedge funds with a bullish position in FDX a year ago. With hedgies’ sentiment swirling, there exists a few noteworthy hedge fund managers who were boosting their holdings considerably (or already accumulated large positions). 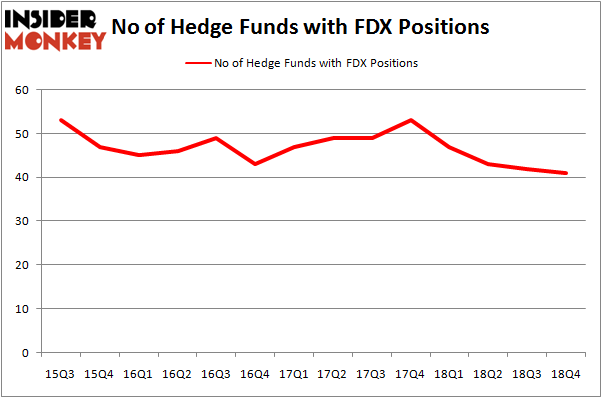 Seeing as FedEx Corporation (NYSE:FDX) has faced declining sentiment from the smart money, it’s easy to see that there lies a certain “tier” of hedge funds that decided to sell off their full holdings last quarter. At the top of the heap, Alexander Mitchell’s Scopus Asset Management dropped the largest stake of all the hedgies tracked by Insider Monkey, totaling close to $120.4 million in stock. John Brennan’s fund, Sirios Capital Management, also dropped its stock, about $40.6 million worth. These moves are interesting, as total hedge fund interest fell by 1 funds last quarter.

As you can see these stocks had an average of 16.75 hedge funds with bullish positions and the average amount invested in these stocks was $559 million. That figure was $2196 million in FDX’s case. Illinois Tool Works Inc. (NYSE:ITW) is the most popular stock in this table. On the other hand ING Groep N.V. (NYSE:ING) is the least popular one with only 7 bullish hedge fund positions. Compared to these stocks FedEx Corporation (NYSE:FDX) is more popular among hedge funds. Our calculations showed that top 15 most popular stocks among hedge funds returned 19.7% through March 15th and outperformed the S&P 500 ETF (SPY) by 6.6 percentage points. Unfortunately FDX wasn’t in this group. Hedge funds that bet on FDX were disappointed as the stock returned 10.7% and underperformed the market. If you are interested in investing in large cap stocks, you should check out the top 15 hedge fund stocks as 13 of these outperformed the market.