Were Hedge Funds Right About Souring On Amphenol Corporation (APH) ?

Is Amphenol Corporation (NYSE:APH) a bargain? The best stock pickers are selling. The number of bullish hedge fund positions were trimmed by 4 in recent months. Our calculations also showed that APH isn’t among the 30 most popular stocks among hedge funds. APH was in 21 hedge funds’ portfolios at the end of December. There were 25 hedge funds in our database with APH positions at the end of the previous quarter. 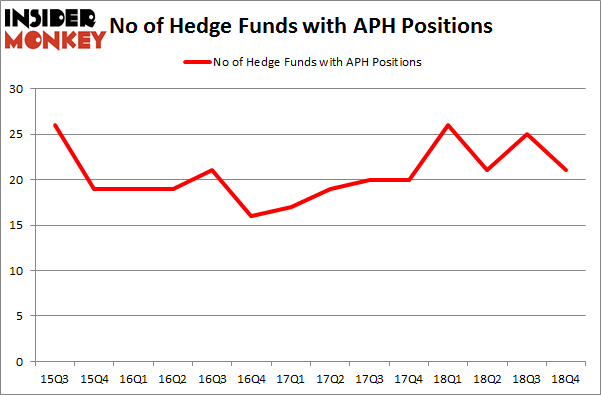 Seeing as Amphenol Corporation (NYSE:APH) has witnessed falling interest from hedge fund managers, logic holds that there was a specific group of funds who were dropping their entire stakes heading into Q3. Interestingly, Steve Cohen’s Point72 Asset Management sold off the largest investment of the 700 funds tracked by Insider Monkey, comprising close to $22.6 million in stock. Glenn Russell Dubin’s fund, Highbridge Capital Management, also cut its stock, about $6.3 million worth. These moves are intriguing to say the least, as total hedge fund interest was cut by 4 funds heading into Q3.

Let’s also examine hedge fund activity in other stocks – not necessarily in the same industry as Amphenol Corporation (NYSE:APH) but similarly valued. These stocks are Ferrari N.V. (NYSE:RACE), Equity Residential (NYSE:EQR), Corning Incorporated (NYSE:GLW), and MPLX LP (NYSE:MPLX). All of these stocks’ market caps are closest to APH’s market cap.

As you can see these stocks had an average of 23 hedge funds with bullish positions and the average amount invested in these stocks was $483 million. That figure was $479 million in APH’s case. Corning Incorporated (NYSE:GLW) is the most popular stock in this table. On the other hand MPLX LP (NYSE:MPLX) is the least popular one with only 11 bullish hedge fund positions. Amphenol Corporation (NYSE:APH) is not the least popular stock in this group but hedge fund interest is still below average. This is a slightly negative signal and we’d rather spend our time researching stocks that hedge funds are piling on. Our calculations showed that top 15 most popular stocks among hedge funds returned 19.7% through March 15th and outperformed the S&P 500 ETF (SPY) by 6.6 percentage points. Hedge funds were also right about betting on APH, though not to the same extent, as the stock returned 17.8% and outperformed the market as well.