The 700+ hedge funds and money managers tracked by Insider Monkey have already compiled and submitted their 13F filings for the fourth quarter, which unveil their equity positions as of December 31. We went through these filings, fixed typos and other more significant errors and identified the changes in hedge fund positions. Our extensive review of these public filings is finally over, so this article is set to reveal the smart money sentiment towards Aegion Corp – Class A (NASDAQ:AEGN).

Is Aegion Corp – Class A (NASDAQ:AEGN) a bargain? Money managers are getting less bullish. The number of long hedge fund bets were trimmed by 1 in recent months. Our calculations also showed that AEGN isn’t among the 30 most popular stocks among hedge funds. AEGN was in 9 hedge funds’ portfolios at the end of December. There were 10 hedge funds in our database with AEGN holdings at the end of the previous quarter.

To most stock holders, hedge funds are seen as worthless, old investment tools of years past. While there are over 8000 funds with their doors open today, Our researchers hone in on the masters of this club, about 750 funds. These hedge fund managers command the lion’s share of the smart money’s total capital, and by tailing their inimitable picks, Insider Monkey has brought to light a few investment strategies that have historically defeated the market. Insider Monkey’s flagship hedge fund strategy outpaced the S&P 500 index by nearly 5 percentage points per annum since its inception in May 2014 through early November 2018. We were able to generate large returns even by identifying short candidates. Our portfolio of short stocks lost 27.5% since February 2017 (through March 12th) even though the market was up nearly 25% during the same period. We just shared a list of 6 short targets in our latest quarterly update and they are already down an average of 6% in less than a month.

How are hedge funds trading Aegion Corp – Class A (NASDAQ:AEGN)? 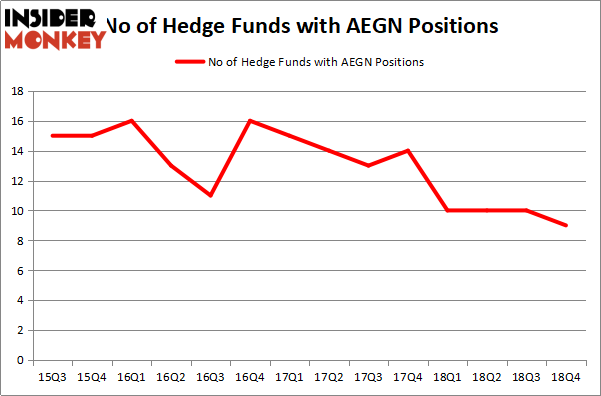 More specifically, Royce & Associates was the largest shareholder of Aegion Corp – Class A (NASDAQ:AEGN), with a stake worth $11.1 million reported as of the end of December. Trailing Royce & Associates was Renaissance Technologies, which amassed a stake valued at $10.1 million. D E Shaw, GAMCO Investors, and Citadel Investment Group were also very fond of the stock, giving the stock large weights in their portfolios.

Due to the fact that Aegion Corp – Class A (NASDAQ:AEGN) has witnessed a decline in interest from the smart money, it’s safe to say that there was a specific group of fund managers that elected to cut their full holdings by the end of the third quarter. At the top of the heap, Israel Englander’s Millennium Management dumped the biggest stake of all the hedgies watched by Insider Monkey, comprising about $0.9 million in stock. Jeffrey Talpins’s fund, Element Capital Management, also said goodbye to its stock, about $0.2 million worth. These bearish behaviors are intriguing to say the least, as total hedge fund interest was cut by 1 funds by the end of the third quarter.

As you can see these stocks had an average of 16 hedge funds with bullish positions and the average amount invested in these stocks was $126 million. That figure was $26 million in AEGN’s case. AMAG Pharmaceuticals, Inc. (NASDAQ:AMAG) is the most popular stock in this table. On the other hand Tredegar Corporation (NYSE:TG) is the least popular one with only 11 bullish hedge fund positions. Compared to these stocks Aegion Corp – Class A (NASDAQ:AEGN) is even less popular than TG. Our calculations showed that top 15 most popular stocks) among hedge funds returned 24.2% through April 22nd and outperformed the S&P 500 ETF (SPY) by more than 7 percentage points. A small number of hedge funds were also right about betting on AEGN, though not to the same extent, as the stock returned 17.1% and outperformed the market as well.