Hedge funds don’t get the respect they used to get. Nowadays investors prefer passive funds over actively managed funds. One thing they don’t realize is that 100% of the passive funds didn’t see the coronavirus recession coming, but a lot of hedge funds did. Even we published an article near the end of February and predicted a US recession. Think about all the losses you could have avoided if you sold your shares in February and bought them back at the end of March. Keeping this in mind, let’s take a look at whether Dicerna Pharmaceuticals Inc (NASDAQ:DRNA) is a good investment right now.

Dicerna Pharmaceuticals Inc (NASDAQ:DRNA) has seen an increase in support from the world’s most elite money managers recently. DRNA was in 31 hedge funds’ portfolios at the end of the fourth quarter of 2019. There were 21 hedge funds in our database with DRNA holdings at the end of the previous quarter. Our calculations also showed that DRNA isn’t among the 30 most popular stocks among hedge funds (click for Q4 rankings and see the video at the end of this article for Q3 rankings).

We leave no stone unturned when looking for the next great investment idea. For example, this investor can predict short term winners following earnings announcements with 77% accuracy, so we check out his stock picks. A former hedge fund manager is pitching the “next Amazon” in this video; again we are listening. We read hedge fund investor letters and listen to stock pitches at hedge fund conferences. Our best call in 2020 was shorting the market when S&P 500 was trading at 3150 after realizing the coronavirus pandemic’s significance before most investors. With all of this in mind let’s take a peek at the fresh hedge fund action encompassing Dicerna Pharmaceuticals Inc (NASDAQ:DRNA).

What does smart money think about Dicerna Pharmaceuticals Inc (NASDAQ:DRNA)?

Heading into the first quarter of 2020, a total of 31 of the hedge funds tracked by Insider Monkey held long positions in this stock, a change of 48% from one quarter earlier. By comparison, 20 hedge funds held shares or bullish call options in DRNA a year ago. With hedge funds’ positions undergoing their usual ebb and flow, there exists an “upper tier” of key hedge fund managers who were upping their stakes substantially (or already accumulated large positions). 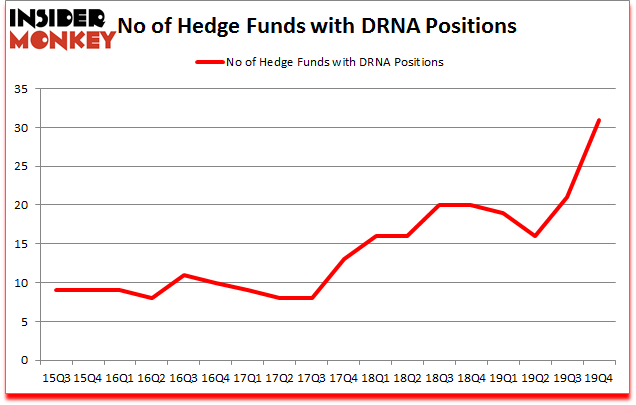 More specifically, EcoR1 Capital was the largest shareholder of Dicerna Pharmaceuticals Inc (NASDAQ:DRNA), with a stake worth $79.9 million reported as of the end of September. Trailing EcoR1 Capital was Citadel Investment Group, which amassed a stake valued at $44.9 million. Bridger Management, Point72 Asset Management, and Renaissance Technologies were also very fond of the stock, becoming one of the largest hedge fund holders of the company. In terms of the portfolio weights assigned to each position EcoR1 Capital allocated the biggest weight to Dicerna Pharmaceuticals Inc (NASDAQ:DRNA), around 7.32% of its 13F portfolio. Aquilo Capital Management is also relatively very bullish on the stock, earmarking 5.08 percent of its 13F equity portfolio to DRNA.

As one would reasonably expect, key money managers were breaking ground themselves. Point72 Asset Management, managed by Steve Cohen, established the most outsized position in Dicerna Pharmaceuticals Inc (NASDAQ:DRNA). Point72 Asset Management had $27.8 million invested in the company at the end of the quarter. Richard Driehaus’s Driehaus Capital also initiated a $21.9 million position during the quarter. The other funds with brand new DRNA positions are Marc Schneidman’s Aquilo Capital Management, Michael Rockefeller and Karl Kroeker’s Woodline Partners, and Greg Martinez’s Parkman Healthcare Partners.

As you can see these stocks had an average of 18.25 hedge funds with bullish positions and the average amount invested in these stocks was $146 million. That figure was $352 million in DRNA’s case. Avaya Holdings Corp. (NYSE:AVYA) is the most popular stock in this table. On the other hand Cortexyme, Inc. (NASDAQ:CRTX) is the least popular one with only 1 bullish hedge fund positions. Dicerna Pharmaceuticals Inc (NASDAQ:DRNA) is not the most popular stock in this group but hedge fund interest is still above average. Our calculations showed that top 10 most popular stocks among hedge funds returned 41.4% in 2019 and outperformed the S&P 500 ETF (SPY) by 10.1 percentage points. These stocks gained 1.0% in 2020 through May 1st but still beat the market by 12.9 percentage points. Hedge funds were also right about betting on DRNA, though not to the same extent, as the stock returned -9.5% during the first four months of 2020 (through May 1st) and outperformed the market as well.