Before we spend days researching a stock idea we’d like to take a look at how hedge funds and billionaire investors recently traded that stock. S&P 500 Index ETF (SPY) lost 13.5% in the fourth quarter. Seven out of 11 industry groups in the S&P 500 Index were down more than 20% from their 52-week highs at the trough of the stock market crash. The average return of a randomly picked stock in the index was even worse. This means you (or a monkey throwing a dart) have less than an even chance of beating the market by randomly picking a stock. On the other hand, the top 15 most popular S&P 500 stocks among hedge funds not only recouped their Q4 losses but also outperformed the index by more than 3 percentage points. In this article, we will take a look at what hedge funds think about Infosys Limited (NYSE:INFY).

Infosys Limited (NYSE:INFY) was in 17 hedge funds’ portfolios at the end of the fourth quarter of 2018. INFY has experienced a decrease in activity from the world’s largest hedge funds lately. There were 18 hedge funds in our database with INFY positions at the end of the previous quarter. Our calculations also showed that INFY isn’t among the 30 most popular stocks among hedge funds.

At Q4’s end, a total of 17 of the hedge funds tracked by Insider Monkey were long this stock, a change of -6% from the second quarter of 2018. Below, you can check out the change in hedge fund sentiment towards INFY over the last 14 quarters. With hedge funds’ sentiment swirling, there exists an “upper tier” of key hedge fund managers who were upping their holdings substantially (or already accumulated large positions). 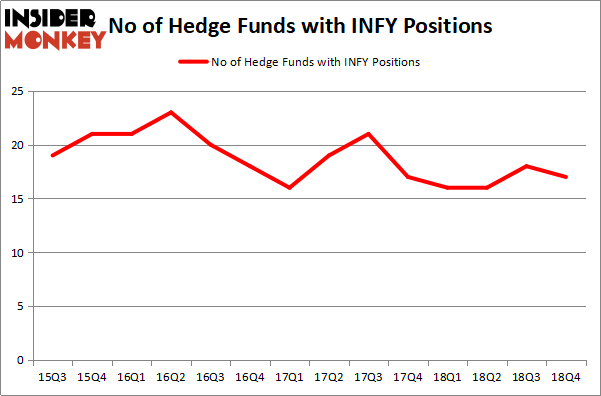 Judging by the fact that Infosys Limited (NYSE:INFY) has faced falling interest from the aggregate hedge fund industry, it’s safe to say that there exists a select few funds that decided to sell off their full holdings heading into Q3. It’s worth mentioning that Richard Driehaus’s Driehaus Capital said goodbye to the biggest investment of all the hedgies followed by Insider Monkey, worth close to $11.1 million in stock. J. Alan Reid, Jr.’s fund, Forward Management, also sold off its stock, about $3.2 million worth. These moves are intriguing to say the least, as total hedge fund interest dropped by 1 funds heading into Q3.

As you can see these stocks had an average of 42.25 hedge funds with bullish positions and the average amount invested in these stocks was $1739 million. That figure was $1043 million in INFY’s case. Marathon Petroleum Corp (NYSE:MPC) is the most popular stock in this table. On the other hand China Telecom Corporation Limited (NYSE:CHA) is the least popular one with only 8 bullish hedge fund positions. Infosys Limited (NYSE:INFY) is not the least popular stock in this group but hedge fund interest is still below average. This is a slightly negative signal and we’d rather spend our time researching stocks that hedge funds are piling on. Our calculations showed that top 15 most popular stocks among hedge funds returned 19.7% through March 15th and outperformed the S&P 500 ETF (SPY) by 6.6 percentage points. Unfortunately INFY wasn’t in this group. Hedge funds that bet on INFY were disappointed as the stock returned 13.0% and underperformed the market. If you are interested in investing in large cap stocks, you should check out the top 15 hedge fund stocks as 13 of these outperformed the market.

Is Vertex Pharmaceuticals Incorporated (VRTX) A Good Stock To Buy?
Monthly Newsletter Strategy
Download a free copy of our newsletter and see the details inside!
Hedge Fund Resource Center
Related News
Hedge Funds Are Buying Infosys Limited (INFY) Billionaire Ken Fisher Loves This Indian IT Company Billionaire Ken Fisher is Bullish About These Dividend Stocks Five Indian Stocks Hedge Funds Are Fond of Here’s What You Need To Know About The Financial Markets Today Infosys Ltd ADR (INFY): Are Hedge Funds Right About This Stock? 5 Favorite Indian Stocks of Hedge Funds Ten of the Most Common Addictions 13 African Countries with the Largest White Population in 2018 6 Causes of Human Trafficking in Africa, India, and US
Billionaire Hedge Funds