We at Insider Monkey have gone over 700 13F filings that hedge funds and prominent investors are required to file by the SEC The 13F filings show the funds’ and investors’ portfolio positions as of December 31st. In this article, we look at what those funds think of Banco Santander, S.A. (NYSE:SAN) based on that data.

Is Banco Santander, S.A. (NYSE:SAN) worth your attention right now? Money managers are selling. The number of bullish hedge fund bets shrunk by 1 in recent months. Our calculations also showed that SAN isn’t among the 30 most popular stocks among hedge funds. SAN was in 18 hedge funds’ portfolios at the end of December. There were 19 hedge funds in our database with SAN positions at the end of the previous quarter.

What have hedge funds been doing with Banco Santander, S.A. (NYSE:SAN)?

At Q4’s end, a total of 18 of the hedge funds tracked by Insider Monkey were long this stock, a change of -5% from the second quarter of 2018. On the other hand, there were a total of 17 hedge funds with a bullish position in SAN a year ago. With hedgies’ sentiment swirling, there exists a few noteworthy hedge fund managers who were increasing their holdings considerably (or already accumulated large positions). 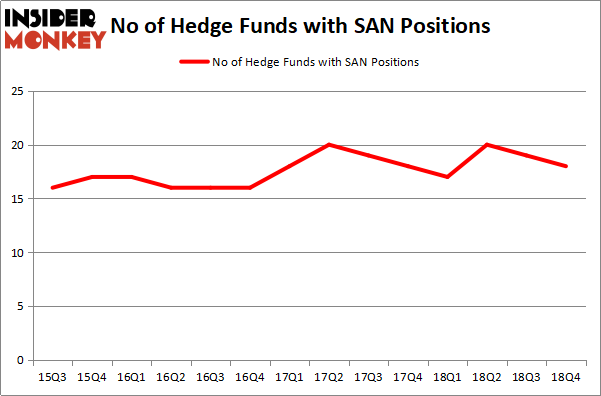 Seeing as Banco Santander, S.A. (NYSE:SAN) has faced a decline in interest from the aggregate hedge fund industry, it’s safe to say that there were a few hedge funds who were dropping their full holdings in the third quarter. Interestingly, David Halpert’s Prince Street Capital Management sold off the largest stake of the “upper crust” of funds monitored by Insider Monkey, worth about $5.3 million in stock, and Peter Rathjens, Bruce Clarke and John Campbell’s Arrowstreet Capital was right behind this move, as the fund cut about $5.1 million worth. These bearish behaviors are intriguing to say the least, as aggregate hedge fund interest fell by 1 funds in the third quarter.

As you can see these stocks had an average of 47 hedge funds with bullish positions and the average amount invested in these stocks was $2253 million. That figure was $698 million in SAN’s case. CIGNA Corporation (NYSE:CI) is the most popular stock in this table. On the other hand Equinor ASA (NYSE:EQNR) is the least popular one with only 13 bullish hedge fund positions. Banco Santander, S.A. (NYSE:SAN) is not the least popular stock in this group but hedge fund interest is still below average. This is a slightly negative signal and we’d rather spend our time researching stocks that hedge funds are piling on. Our calculations showed that top 15 most popular stocks among hedge funds returned 19.7% through March 15th and outperformed the S&P 500 ETF (SPY) by 6.6 percentage points. Unfortunately SAN wasn’t in this group. Hedge funds that bet on SAN were disappointed as the stock returned 10.9% and underperformed the market. If you are interested in investing in large cap stocks, you should check out the top 15 hedge fund stocks as 13 of these outperformed the market.

Were Hedge Funds Right About Buying United Technologies Corporation (UTX)?
Monthly Newsletter Strategy
Download a free copy of our newsletter and see the details inside!
Hedge Fund Resource Center
Related News
Hedge Funds Are Selling Banco Santander, S.A. (SAN) Hedge Funds Are Buying Banco Santander, S.A. (SAN) Billionaire Ken Fisher is Bullish About These Dividend Stocks Is Banco Santander, S.A. (ADR) (SAN) A Good Stock To Buy? Why Twitter, eBay, Alibaba, and Two Other Stocks Are Trending Why Investors Are Buzzing About These 5 Stocks Today Banking Stocks Are in the Spotlight after Fed’s Stress Tests Ten of the Most Common Addictions 13 African Countries with the Largest White Population in 2018 6 Causes of Human Trafficking in Africa, India, and US
Billionaire Hedge Funds