Investing in small cap stocks has historically been a way to outperform the market, as small cap companies typically grow faster on average than the blue chips. That outperformance comes with a price, however, as there are occasional periods of higher volatility. The fourth quarter of 2018 is one of those periods, as the Russell 2000 ETF (IWM) has underperformed the larger S&P 500 ETF (SPY) by nearly 7 percentage points. Given that the funds we track tend to have a disproportionate amount of their portfolios in smaller cap stocks, they have seen some volatility in their portfolios too. Actually their moves are potentially one of the factors that contributed to this volatility. In this article, we use our extensive database of hedge fund holdings to find out what the smart money thinks of Ambev SA (NYSE:ABEV).

Ambev SA (NYSE:ABEV) investors should pay attention to a decrease in hedge fund interest of late. ABEV was in 13 hedge funds’ portfolios at the end of the fourth quarter of 2018. There were 14 hedge funds in our database with ABEV holdings at the end of the previous quarter. Our calculations also showed that ABEV isn’t among the 30 most popular stocks among hedge funds.

What does the smart money think about Ambev SA (NYSE:ABEV)?

At Q4’s end, a total of 13 of the hedge funds tracked by Insider Monkey were long this stock, a change of -7% from the second quarter of 2018. Below, you can check out the change in hedge fund sentiment towards ABEV over the last 14 quarters. With hedge funds’ sentiment swirling, there exists an “upper tier” of noteworthy hedge fund managers who were upping their stakes significantly (or already accumulated large positions). 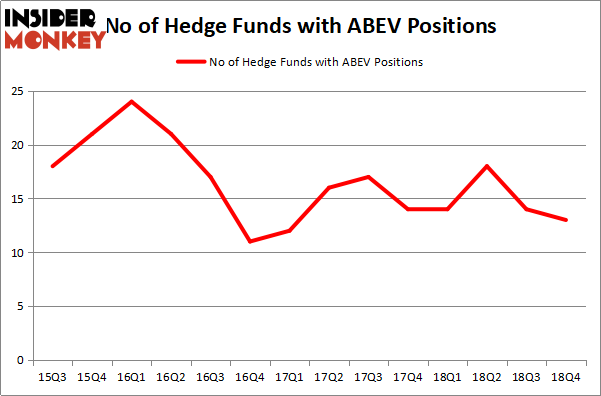 The largest stake in Ambev SA (NYSE:ABEV) was held by Fisher Asset Management, which reported holding $110.2 million worth of stock at the end of September. It was followed by Capital Growth Management with a $40 million position. Other investors bullish on the company included Renaissance Technologies, Two Sigma Advisors, and Citadel Investment Group.

Due to the fact that Ambev SA (NYSE:ABEV) has witnessed falling interest from hedge fund managers, it’s safe to say that there is a sect of hedge funds who sold off their positions entirely last quarter. At the top of the heap, Peter Rathjens, Bruce Clarke and John Campbell’s Arrowstreet Capital sold off the largest investment of the 700 funds monitored by Insider Monkey, totaling an estimated $31.7 million in stock. Richard Driehaus’s fund, Driehaus Capital, also dumped its stock, about $0.3 million worth. These transactions are intriguing to say the least, as aggregate hedge fund interest fell by 1 funds last quarter.

As you can see these stocks had an average of 23.25 hedge funds with bullish positions and the average amount invested in these stocks was $771 million. That figure was $234 million in ABEV’s case. Becton, Dickinson and Company (NYSE:BDX) is the most popular stock in this table. On the other hand The Bank of Nova Scotia (NYSE:BNS) is the least popular one with only 14 bullish hedge fund positions. Compared to these stocks Ambev SA (NYSE:ABEV) is even less popular than BNS. Our calculations showed that top 15 most popular stocks among hedge funds returned 19.7% through March 15th and outperformed the S&P 500 ETF (SPY) by 6.6 percentage points. Unfortunately ABEV wasn’t in this group. Hedge funds that bet on ABEV were disappointed as the stock returned 10.2% and underperformed the market. If you are interested in investing in large cap stocks, you should check out the top 15 hedge fund stocks as 13 of these outperformed the market.

Were Hedge Funds Right About Buying Costco Wholesale Corporation (COST)?
Monthly Newsletter Strategy
Download a free copy of our newsletter and see the details inside!
Hedge Fund Resource Center
Related News
Hedge Funds Aren’t Very Hopeful About Brazilian Brewer Ambev S.A. (ABEV) What’s Going On In The Finance World Today? 10 Best Selling Tequila Brands In The US Is Ambev SA (ADR) (ABEV) A Good Stock To Buy? Hedge Funds Still Like These Brazilian Stocks Five Alcohol Stocks Hedge Funds Like The Smart Money Is Fond of These Five Alcohol Stocks Ten of the Most Common Addictions 13 African Countries with the Largest White Population in 2018 6 Causes of Human Trafficking in Africa, India, and US
Billionaire Hedge Funds