Will the new coronavirus cause a recession in US in the next 6 months? On February 27th, we put the probability at 75% and we predicted that the market will decline by at least 20% in (Recession is Imminent: We Need A Travel Ban NOW). In these volatile markets we scrutinize hedge fund filings to get a reading on which direction each stock might be going. In this article, we will take a closer look at hedge fund sentiment towards ConocoPhillips (NYSE:COP).

Is ConocoPhillips (NYSE:COP) worth your attention right now? The best stock pickers are getting less optimistic. The number of bullish hedge fund bets were trimmed by 8 recently. Our calculations also showed that COP isn’t among the 30 most popular stocks among hedge funds (click for Q4 rankings and see the video at the end of this article for Q3 rankings). COP was in 62 hedge funds’ portfolios at the end of December. There were 70 hedge funds in our database with COP holdings at the end of the previous quarter.

If you’d ask most traders, hedge funds are seen as slow, outdated investment vehicles of years past. While there are greater than 8000 funds with their doors open at present, Our experts hone in on the elite of this group, about 850 funds. These money managers orchestrate bulk of all hedge funds’ total asset base, and by keeping an eye on their highest performing stock picks, Insider Monkey has discovered various investment strategies that have historically surpassed the market. Insider Monkey’s flagship short hedge fund strategy defeated the S&P 500 short ETFs by around 20 percentage points annually since its inception in March 2017. Our portfolio of short stocks lost 35.3% since February 2017 (through March 3rd) even though the market was up more than 35% during the same period. We just shared a list of 7 short targets in our latest quarterly update . 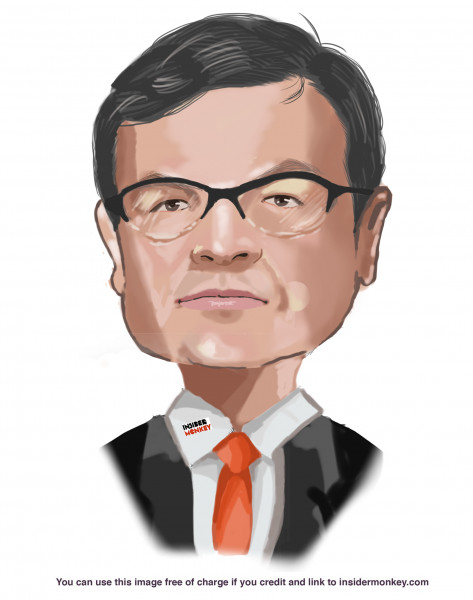 We leave no stone unturned when looking for the next great investment idea. For example, this trader is claiming triple digit returns, so we check out his latest trade recommendations. We read hedge fund investor letters and listen to stock pitches at hedge fund conferences (by the way watch this video if you want to hear one of the best healthcare hedge fund manager’s coronavirus analysis). Our best call in 2020 was shorting the market when S&P 500 was trading at 3150 after realizing the coronavirus pandemic’s significance before most investors. Now we’re going to view the latest hedge fund action encompassing ConocoPhillips (NYSE:COP).

At Q4’s end, a total of 62 of the hedge funds tracked by Insider Monkey held long positions in this stock, a change of -11% from the third quarter of 2019. The graph below displays the number of hedge funds with bullish position in COP over the last 18 quarters. With hedgies’ positions undergoing their usual ebb and flow, there exists a few notable hedge fund managers who were increasing their stakes meaningfully (or already accumulated large positions). 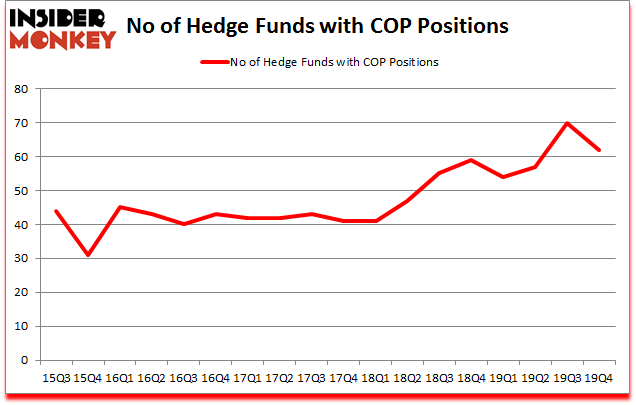 According to publicly available hedge fund and institutional investor holdings data compiled by Insider Monkey, D. E. Shaw’s D E Shaw has the number one position in ConocoPhillips (NYSE:COP), worth close to $625.4 million, corresponding to 0.7% of its total 13F portfolio. On D E Shaw’s heels is Fisher Asset Management, led by Ken Fisher, holding a $280.2 million position; 0.3% of its 13F portfolio is allocated to the company. Other hedge funds and institutional investors that hold long positions include Ken Griffin’s Citadel Investment Group, Israel Englander’s Millennium Management and Steve Cohen’s Point72 Asset Management. In terms of the portfolio weights assigned to each position Elm Ridge Capital allocated the biggest weight to ConocoPhillips (NYSE:COP), around 6.14% of its 13F portfolio. Arosa Capital Management is also relatively very bullish on the stock, earmarking 4.25 percent of its 13F equity portfolio to COP.

Seeing as ConocoPhillips (NYSE:COP) has witnessed declining sentiment from the smart money, logic holds that there is a sect of money managers that elected to cut their positions entirely by the end of the third quarter. At the top of the heap, Renaissance Technologies sold off the biggest stake of all the hedgies monitored by Insider Monkey, worth about $68.5 million in stock. Doug Silverman and Alexander Klabin’s fund, Senator Investment Group, also dumped its stock, about $28.5 million worth. These transactions are intriguing to say the least, as total hedge fund interest fell by 8 funds by the end of the third quarter.

Let’s check out hedge fund activity in other stocks – not necessarily in the same industry as ConocoPhillips (NYSE:COP) but similarly valued. We will take a look at Chubb Limited (NYSE:CB), The PNC Financial Services Group Inc. (NYSE:PNC), Banco Santander, S.A. (NYSE:SAN), and The Bank of Nova Scotia (NYSE:BNS). This group of stocks’ market values are closest to COP’s market value.

As you can see these stocks had an average of 25.75 hedge funds with bullish positions and the average amount invested in these stocks was $949 million. That figure was $2438 million in COP’s case. The PNC Financial Services Group Inc. (NYSE:PNC) is the most popular stock in this table. On the other hand The Bank of Nova Scotia (NYSE:BNS) is the least popular one with only 16 bullish hedge fund positions. Compared to these stocks ConocoPhillips (NYSE:COP) is more popular among hedge funds. Our calculations showed that top 10 most popular stocks among hedge funds returned 41.4% in 2019 and outperformed the S&P 500 ETF (SPY) by 10.1 percentage points. These stocks lost 1.0% in 2020 through April 20th and still beat the market by 11 percentage points. Unfortunately COP wasn’t nearly as popular as these 10 stocks and hedge funds that were betting on COP were disappointed as the stock returned -46.5% during the three months of 2020 (through April 20th) and underperformed the market. If you are interested in investing in large cap stocks with huge upside potential, you should check out the top 10 most popular stocks among hedge funds as most of these stocks already outperformed the market in 2020.