In these volatile markets we scrutinize hedge fund filings to get a reading on which direction each stock might be going. We at Insider Monkey have gone over 835 13F filings that hedge funds and prominent investors are required to file by the SEC The 13F filings show the funds’ and investors’ portfolio positions as of December 31st. In this article, we look at what those funds think of Compania Cervecerias Unidas S.A. (NYSE:CCU) based on that data.

Is Compania Cervecerias Unidas S.A. (NYSE:CCU) the right investment to pursue these days? Investors who are in the know are getting less optimistic. The number of long hedge fund bets fell by 1 recently. Our calculations also showed that CCU isn’t among the 30 most popular stocks among hedge funds (click for Q4 rankings and see the video at the end of this article for Q3 rankings). CCU was in 8 hedge funds’ portfolios at the end of December. There were 9 hedge funds in our database with CCU positions at the end of the previous quarter. 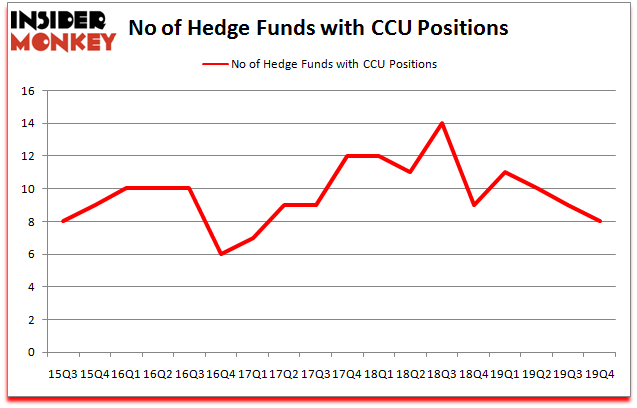 Among these funds, AQR Capital Management held the most valuable stake in Compania Cervecerias Unidas S.A. (NYSE:CCU), which was worth $13 million at the end of the third quarter. On the second spot was D E Shaw which amassed $9.7 million worth of shares. Millennium Management, Renaissance Technologies, and Royce & Associates were also very fond of the stock, becoming one of the largest hedge fund holders of the company. In terms of the portfolio weights assigned to each position Stevens Capital Management allocated the biggest weight to Compania Cervecerias Unidas S.A. (NYSE:CCU), around 0.04% of its 13F portfolio. Royce & Associates is also relatively very bullish on the stock, earmarking 0.03 percent of its 13F equity portfolio to CCU.

Judging by the fact that Compania Cervecerias Unidas S.A. (NYSE:CCU) has faced falling interest from the aggregate hedge fund industry, logic holds that there were a few money managers that elected to cut their positions entirely in the third quarter. At the top of the heap, Peter Rathjens, Bruce Clarke and John Campbell’s Arrowstreet Capital cut the biggest stake of the “upper crust” of funds followed by Insider Monkey, valued at an estimated $2.8 million in stock. Ronald Hua’s fund, Qtron Investments, also cut its stock, about $0.6 million worth. These moves are interesting, as aggregate hedge fund interest fell by 1 funds in the third quarter.

As you can see these stocks had an average of 18.25 hedge funds with bullish positions and the average amount invested in these stocks was $228 million. That figure was $40 million in CCU’s case. Regal Beloit Corporation (NYSE:RBC) is the most popular stock in this table. On the other hand Semtech Corporation (NASDAQ:SMTC) is the least popular one with only 12 bullish hedge fund positions. Compared to these stocks Compania Cervecerias Unidas S.A. (NYSE:CCU) is even less popular than SMTC. Hedge funds dodged a bullet by taking a bearish stance towards CCU. Our calculations showed that the top 20 most popular hedge fund stocks returned 41.3% in 2019 and outperformed the S&P 500 ETF (SPY) by 10.1 percentage points. These stocks lost 13.0% in 2020 through April 6th but managed to beat the market by 4.2 percentage points. Unfortunately CCU wasn’t nearly as popular as these 20 stocks (hedge fund sentiment was very bearish); CCU investors were disappointed as the stock returned -25.7% during the same time period and underperformed the market. If you are interested in investing in large cap stocks with huge upside potential, you should check out the top 20 most popular stocks among hedge funds as most of these stocks already outperformed the market so far in 2020.