In these volatile markets we scrutinize hedge fund filings to get a reading on which direction each stock might be going. After several tireless days we have finished crunching the numbers from nearly 835 13F filings issued by the elite hedge funds and other investment firms that we track at Insider Monkey, which disclosed those firms’ equity portfolios as of December 31st. The results of that effort will be put on display in this article, as we share valuable insight into the smart money sentiment towards Comcast Corporation (NASDAQ:CMCSA).

Comcast Corporation (NASDAQ:CMCSA) shareholders have witnessed a decrease in enthusiasm from smart money lately. CMCSA was in 87 hedge funds’ portfolios at the end of the fourth quarter of 2019. There were 90 hedge funds in our database with CMCSA positions at the end of the previous quarter. Our calculations also showed that CMCSA ranked 25th among the 30 most popular stocks among hedge funds (click for Q4 rankings and see the video at the end of this article for Q3 rankings).

We leave no stone unturned when looking for the next great investment idea. For example, this trader is claiming triple digit returns, so we check out his latest trade recommendations We are probably at the peak of the COVID-19 pandemic, so we check out this biotech investor’s coronavirus picks. We read hedge fund investor letters and listen to stock pitches at hedge fund conferences (by the way watch this video if you want to hear one of the best healthcare hedge fund manager’s coronavirus analysis). Our best call in 2020 was shorting the market when S&P 500 was trading at 3150 after realizing the coronavirus pandemic’s significance before most investors. Now we’re going to check out the latest hedge fund action regarding Comcast Corporation (NASDAQ:CMCSA).

Heading into the first quarter of 2020, a total of 87 of the hedge funds tracked by Insider Monkey were bullish on this stock, a change of -3% from one quarter earlier. On the other hand, there were a total of 83 hedge funds with a bullish position in CMCSA a year ago. With hedge funds’ positions undergoing their usual ebb and flow, there exists a select group of noteworthy hedge fund managers who were adding to their holdings significantly (or already accumulated large positions). 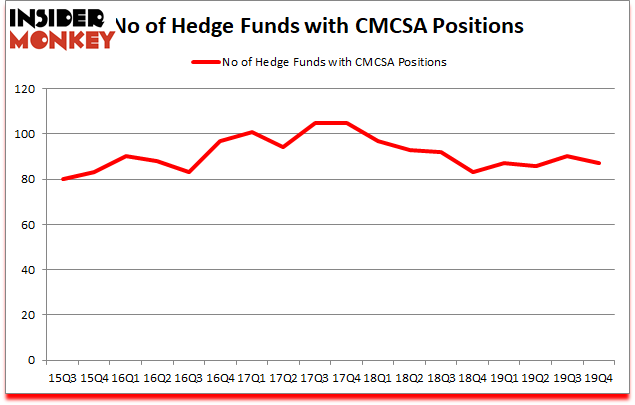 The largest stake in Comcast Corporation (NASDAQ:CMCSA) was held by Eagle Capital Management, which reported holding $1593.8 million worth of stock at the end of September. It was followed by First Pacific Advisors LLC with a $468 million position. Other investors bullish on the company included BlueSpruce Investments, Arrowstreet Capital, and Citadel Investment Group. In terms of the portfolio weights assigned to each position 3G Capital allocated the biggest weight to Comcast Corporation (NASDAQ:CMCSA), around 27.4% of its 13F portfolio. BlueDrive Global Investors is also relatively very bullish on the stock, earmarking 17.98 percent of its 13F equity portfolio to CMCSA.

Because Comcast Corporation (NASDAQ:CMCSA) has experienced bearish sentiment from the entirety of the hedge funds we track, we can see that there was a specific group of funds that decided to sell off their positions entirely last quarter. It’s worth mentioning that Andrew Immerman and Jeremy Schiffman’s Palestra Capital Management cut the biggest stake of the 750 funds followed by Insider Monkey, valued at an estimated $155 million in stock. Daniel Lascano’s fund, Lomas Capital Management, also said goodbye to its stock, about $53.3 million worth. These bearish behaviors are interesting, as total hedge fund interest dropped by 3 funds last quarter.

Let’s now take a look at hedge fund activity in other stocks – not necessarily in the same industry as Comcast Corporation (NASDAQ:CMCSA) but similarly valued. We will take a look at Cisco Systems, Inc. (NASDAQ:CSCO), Toyota Motor Corporation (NYSE:TM), PepsiCo, Inc. (NYSE:PEP), and The Boeing Company (NYSE:BA). This group of stocks’ market caps are closest to CMCSA’s market cap.

As you can see these stocks had an average of 55.25 hedge funds with bullish positions and the average amount invested in these stocks was $2561 million. That figure was $6748 million in CMCSA’s case. The Boeing Company (NYSE:BA) is the most popular stock in this table. On the other hand Toyota Motor Corporation (NYSE:TM) is the least popular one with only 12 bullish hedge fund positions. Compared to these stocks Comcast Corporation (NASDAQ:CMCSA) is more popular among hedge funds. Our calculations showed that top 10 most popular stocks among hedge funds returned 41.4% in 2019 and outperformed the S&P 500 ETF (SPY) by 10.1 percentage points. These stocks lost 1.0% in 2020 through April 20th and still beat the market by 11 percentage points. Unfortunately CMCSA wasn’t nearly as popular as these 10 stocks and hedge funds that were betting on CMCSA were disappointed as the stock returned -16.3% during the three months of 2020 (through April 20th) and underperformed the market. If you are interested in investing in large cap stocks with huge upside potential, you should check out the top 10 most popular stocks among hedge funds as most of these stocks already outperformed the market in 2020.