Before we spend days researching a stock idea we’d like to take a look at how hedge funds and billionaire investors recently traded that stock. S&P 500 Index ETF (SPY) lost 13.5% in the fourth quarter. Seven out of 11 industry groups in the S&P 500 Index were down more than 20% from their 52-week highs at the trough of the stock market crash. The average return of a randomly picked stock in the index was even worse. This means you (or a monkey throwing a dart) have less than an even chance of beating the market by randomly picking a stock. On the other hand, the top 15 most popular S&P 500 stocks among hedge funds not only recouped their Q4 losses but also outperformed the index by more than 3 percentage points. In this article, we will take a look at what hedge funds think about Chevron Corporation (NYSE:CVX).

Is Chevron Corporation (NYSE:CVX) going to take off soon? Investors who are in the know are getting less optimistic. The number of bullish hedge fund bets dropped by 8 recently. Our calculations also showed that CVX isn’t among the 30 most popular stocks among hedge funds.

At the end of the fourth quarter, a total of 48 of the hedge funds tracked by Insider Monkey were long this stock, a change of -14% from the previous quarter. Below, you can check out the change in hedge fund sentiment towards CVX over the last 14 quarters. With the smart money’s sentiment swirling, there exists an “upper tier” of notable hedge fund managers who were boosting their holdings meaningfully (or already accumulated large positions). 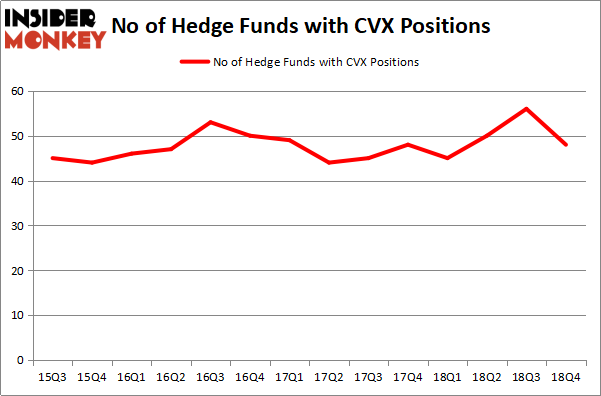 When looking at the institutional investors followed by Insider Monkey, Fisher Asset Management, managed by Ken Fisher, holds the number one position in Chevron Corporation (NYSE:CVX). Fisher Asset Management has a $517.4 million position in the stock, comprising 0.7% of its 13F portfolio. The second largest stake is held by Two Sigma Advisors, managed by John Overdeck and David Siegel, which holds a $292.7 million position; 0.8% of its 13F portfolio is allocated to the stock. Other hedge funds and institutional investors with similar optimism consist of Cliff Asness’s AQR Capital Management, Phill Gross and Robert Atchinson’s Adage Capital Management and Ken Griffin’s Citadel Investment Group.

Seeing as Chevron Corporation (NYSE:CVX) has faced a decline in interest from the smart money, we can see that there lies a certain “tier” of fund managers that slashed their full holdings by the end of the third quarter. It’s worth mentioning that Jim Simons’s Renaissance Technologies said goodbye to the largest investment of the “upper crust” of funds monitored by Insider Monkey, worth an estimated $349.1 million in stock. Matthew Tewksbury’s fund, Stevens Capital Management, also dumped its stock, about $30.5 million worth. These transactions are interesting, as total hedge fund interest was cut by 8 funds by the end of the third quarter.

As you can see these stocks had an average of 52.75 hedge funds with bullish positions and the average amount invested in these stocks was $7392 million. That figure was $1907 million in CVX’s case. Merck & Co., Inc. (NYSE:MRK) is the most popular stock in this table. On the other hand Novartis AG (NYSE:NVS) is the least popular one with only 34 bullish hedge fund positions. Chevron Corporation (NYSE:CVX) is not the least popular stock in this group but hedge fund interest is still below average. Our calculations showed that top 15 most popular stocks among hedge funds returned 19.7% through March 15th and outperformed the S&P 500 ETF (SPY) by 6.6 percentage points. Hedge funds were also right about betting on Chevron as the stock returned 16.3% and outperformed the market as well.