Will the new coronavirus cause a recession in US in the next 6 months? On February 27th, we put the probability at 75% and we predicted that the market will decline by at least 20% in (Recession is Imminent: We Need A Travel Ban NOW). In these volatile markets we scrutinize hedge fund filings to get a reading on which direction each stock might be going. In this article, we will take a closer look at hedge fund sentiment towards Capital One Financial Corp. (NYSE:COF).

Is Capital One Financial Corp. (NYSE:COF) a healthy stock for your portfolio? The smart money is in a bullish mood. The number of bullish hedge fund bets rose by 3 recently. Our calculations also showed that COF isn’t among the 30 most popular stocks among hedge funds (click for Q4 rankings and see the video at the end of this article for Q3 rankings).

According to most traders, hedge funds are seen as slow, outdated financial tools of yesteryear. While there are over 8000 funds with their doors open at the moment, Our experts hone in on the bigwigs of this club, about 850 funds. These hedge fund managers direct bulk of the hedge fund industry’s total asset base, and by tracking their finest investments, Insider Monkey has brought to light various investment strategies that have historically exceeded the S&P 500 index. Insider Monkey’s flagship short hedge fund strategy beat the S&P 500 short ETFs by around 20 percentage points a year since its inception in March 2017. Our portfolio of short stocks lost 35.3% since February 2017 (through March 3rd) even though the market was up more than 35% during the same period. We just shared a list of 7 short targets in our latest quarterly update .

With all of this in mind we’re going to take a peek at the recent hedge fund action surrounding Capital One Financial Corp. (NYSE:COF).

At the end of the fourth quarter, a total of 50 of the hedge funds tracked by Insider Monkey were bullish on this stock, a change of 6% from one quarter earlier. By comparison, 44 hedge funds held shares or bullish call options in COF a year ago. With hedgies’ sentiment swirling, there exists an “upper tier” of notable hedge fund managers who were boosting their stakes meaningfully (or already accumulated large positions). 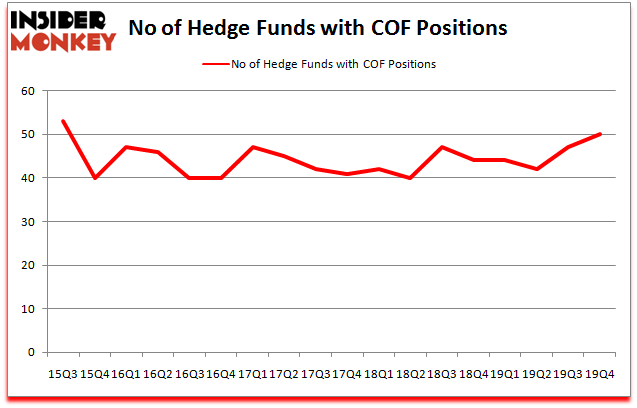 Among these funds, Pzena Investment Management held the most valuable stake in Capital One Financial Corp. (NYSE:COF), which was worth $571.3 million at the end of the third quarter. On the second spot was AQR Capital Management which amassed $255.9 million worth of shares. Citadel Investment Group, Antipodes Partners, and Fisher Asset Management were also very fond of the stock, becoming one of the largest hedge fund holders of the company. In terms of the portfolio weights assigned to each position Antipodes Partners allocated the biggest weight to Capital One Financial Corp. (NYSE:COF), around 5.77% of its 13F portfolio. Second Curve Capital is also relatively very bullish on the stock, earmarking 4.77 percent of its 13F equity portfolio to COF.

Consequently, some big names have jumped into Capital One Financial Corp. (NYSE:COF) headfirst. Gillson Capital, managed by Daniel Johnson, assembled the most valuable position in Capital One Financial Corp. (NYSE:COF). Gillson Capital had $46.8 million invested in the company at the end of the quarter. Clint Carlson’s Carlson Capital also made a $10.9 million investment in the stock during the quarter. The following funds were also among the new COF investors: Joe DiMenna’s ZWEIG DIMENNA PARTNERS, Michael Anderson’s Hi-Line Capital Management, and Paul Marshall and Ian Wace’s Marshall Wace LLP.

As you can see these stocks had an average of 39.25 hedge funds with bullish positions and the average amount invested in these stocks was $1609 million. That figure was $2041 million in COF’s case. DuPont de Nemours Inc (NYSE:DD) is the most popular stock in this table. On the other hand ING Groep N.V. (NYSE:ING) is the least popular one with only 14 bullish hedge fund positions. Capital One Financial Corp. (NYSE:COF) is not the most popular stock in this group but hedge fund interest is still above average. This is a slightly positive signal but we’d rather spend our time researching stocks that hedge funds are piling on. Our calculations showed that top 10 most popular stocks among hedge funds returned 41.4% in 2019 and outperformed the S&P 500 ETF (SPY) by 10.1 percentage points. These stocks gained 1.0% in 2020 through May 1st but beat the market by 12.9 percentage points. Unfortunately COF wasn’t nearly as popular as these 10 stocks and hedge funds that were betting on COF were disappointed as the stock returned -39.9% during the same time period and underperformed the market. If you are interested in investing in large cap stocks with huge upside potential, you should check out the top 10 most popular stocks among hedge funds as many of these stocks already outperformed the market so far this year.