As we already know from media reports and hedge fund investor letters, hedge funds delivered their best returns in a decade. Most investors who decided to stick with hedge funds after a rough 2018 recouped their losses by the end of the second quarter. We get to see hedge funds’ thoughts towards the market and individual stocks by aggregating their quarterly portfolio movements and reading their investor letters. In this article, we will particularly take a look at what hedge funds think about Shopify Inc (NYSE:SHOP).

Shopify Inc (NYSE:SHOP) investors should be aware of an increase in activity from the world’s largest hedge funds recently. Our calculations also showed that SHOP isn’t among the 30 most popular stocks among hedge funds (see the video below). 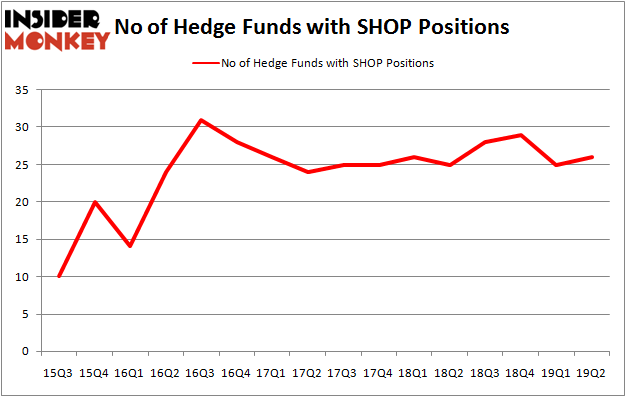 Unlike some fund managers who are betting on Dow reaching 40000 in a year, our long-short investment strategy doesn’t rely on bull markets to deliver double digit returns. We only rely on hedge fund buy/sell signals. We’re going to take a look at the fresh hedge fund action surrounding Shopify Inc (NYSE:SHOP).

More specifically, Lone Pine Capital was the largest shareholder of Shopify Inc (NYSE:SHOP), with a stake worth $451.1 million reported as of the end of March. Trailing Lone Pine Capital was Abdiel Capital Advisors, which amassed a stake valued at $357 million. SCGE Management, Whale Rock Capital Management, and Citadel Investment Group were also very fond of the stock, giving the stock large weights in their portfolios.

As industrywide interest jumped, key hedge funds were leading the bulls’ herd. Two Sigma Advisors, managed by John Overdeck and David Siegel, initiated the most outsized position in Shopify Inc (NYSE:SHOP). Two Sigma Advisors had $172.2 million invested in the company at the end of the quarter. James Crichton’s Hitchwood Capital Management also made a $42 million investment in the stock during the quarter. The other funds with new positions in the stock are Marc Lisker, Glenn Fuhrman and John Phelan’s MSDC Management, Joel Greenblatt’s Gotham Asset Management, and Dmitry Balyasny’s Balyasny Asset Management.

As you can see these stocks had an average of 27.5 hedge funds with bullish positions and the average amount invested in these stocks was $1252 million. That figure was $2201 million in SHOP’s case. Mercadolibre Inc (NASDAQ:MELI) is the most popular stock in this table. On the other hand Xcel Energy Inc (NASDAQ:XEL) is the least popular one with only 18 bullish hedge fund positions. Shopify Inc (NYSE:SHOP) is not the least popular stock in this group but hedge fund interest is still below average. Our calculations showed that top 20 most popular stocks among hedge funds returned 24.4% in 2019 through September 30th and outperformed the S&P 500 ETF (SPY) by 4 percentage points. A small number of hedge funds were also right about betting on SHOP, though not to the same extent, as the stock returned 3.8% during the third quarter and outperformed the market.