Is Seattle Genetics, Inc. (NASDAQ:SGEN) the right pick for your portfolio? Prominent investors are becoming hopeful. The number of long hedge fund bets improved by 1 recently. Our calculations also showed that SGEN isn’t among the 30 most popular stocks among hedge funds.

At the end of the fourth quarter, a total of 16 of the hedge funds tracked by Insider Monkey were bullish on this stock, a change of 7% from the second quarter of 2018. Below, you can check out the change in hedge fund sentiment towards SGEN over the last 14 quarters. So, let’s review which hedge funds were among the top holders of the stock and which hedge funds were making big moves. 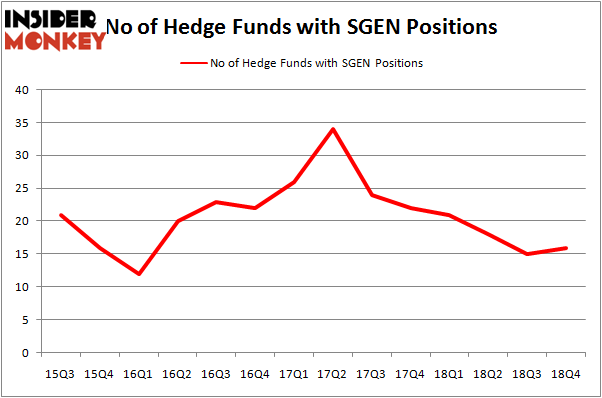 As industrywide interest jumped, some big names were breaking ground themselves. Citadel Investment Group, managed by Ken Griffin, initiated the most outsized position in Seattle Genetics, Inc. (NASDAQ:SGEN). Citadel Investment Group had $68 million invested in the company at the end of the quarter. Kris Jenner, Gordon Bussard, Graham McPhail’s Rock Springs Capital Management also initiated a $11.5 million position during the quarter. The other funds with new positions in the stock are Paul Marshall and Ian Wace’s Marshall Wace LLP and Joel Greenblatt’s Gotham Asset Management.

As you can see these stocks had an average of 26.25 hedge funds with bullish positions and the average amount invested in these stocks was $546 million. That figure was $3168 million in SGEN’s case. Masco Corporation (NYSE:MAS) is the most popular stock in this table. On the other hand Steris Plc (NYSE:STE) is the least popular one with only 22 bullish hedge fund positions. Compared to these stocks Seattle Genetics, Inc. (NASDAQ:SGEN) is even less popular than STE though hedge fund sentiment improved in the most recent quarter where we have data. Our calculations showed that top 15 most popular stocks among hedge funds returned 21.3% through April 8th and outperformed the S&P 500 ETF (SPY) by more than 5 percentage points. Hedge funds were also right about betting on SGEN as the stock returned 41.4% and outperformed the market as well.