During the fourth quarter the Russell 2000 ETF (IWM) lagged the larger S&P 500 ETF (SPY) by nearly 7 percentage points as investors worried over the possible ramifications of rising interest rates. The hedge funds and institutional investors we track typically invest more in smaller-cap stocks than an average investor (i.e. only 298 S&P 500 constituents were among the 500 most popular stocks among hedge funds), and we have seen data that shows those funds paring back their overall exposure. Those funds cutting positions in small-caps is one reason why volatility has increased. In the following paragraphs, we take a closer look at what hedge funds and prominent investors think of Petroleo Brasileiro S.A. – Petrobras (NYSE:PBR) and see how the stock is affected by the recent hedge fund activity.

Is Petroleo Brasileiro S.A. – Petrobras (NYSE:PBR) ready to rally soon? Hedge funds are getting more bullish. The number of bullish hedge fund bets improved by 4 lately. Our calculations also showed that PBR isn’t among the 30 most popular stocks among hedge funds.

What does the smart money think about Petroleo Brasileiro S.A. – Petrobras (NYSE:PBR)? 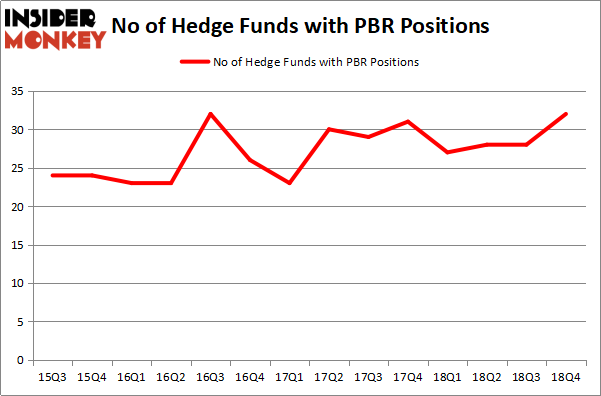 Among these funds, Fisher Asset Management held the most valuable stake in Petroleo Brasileiro S.A. – Petrobras (NYSE:PBR), which was worth $546.3 million at the end of the third quarter. On the second spot was Renaissance Technologies which amassed $342 million worth of shares. Moreover, Capital Growth Management, HBK Investments, and Millennium Management were also bullish on Petroleo Brasileiro S.A. – Petrobras (NYSE:PBR), allocating a large percentage of their portfolios to this stock.

As one would reasonably expect, specific money managers have jumped into Petroleo Brasileiro S.A. – Petrobras (NYSE:PBR) headfirst. Contrarian Capital, managed by Jon Bauer, created the most valuable position in Petroleo Brasileiro S.A. – Petrobras (NYSE:PBR). Contrarian Capital had $71.3 million invested in the company at the end of the quarter. Rob Citrone’s Discovery Capital Management also initiated a $64.2 million position during the quarter. The other funds with new positions in the stock are David Halpert’s Prince Street Capital Management, and Hugh Sloane’s Sloane Robinson Investment Management.

As you can see these stocks had an average of 44.25 hedge funds with bullish positions and the average amount invested in these stocks was $2008 million. That figure was $1758 million in PBR’s case. CVS Health Corporation (NYSE:CVS) is the most popular stock in this table. On the other hand Banco Santander (Brasil) SA (NYSE:BSBR) is the least popular one with only 10 bullish hedge fund positions. Petroleo Brasileiro S.A. – Petrobras (NYSE:PBR) is not the least popular stock in this group but hedge fund interest is still below average. Our calculations showed that top 15 most popular stocks among hedge funds returned 19.7% through March 15th and outperformed the S&P 500 ETF (SPY) by 6.6 percentage points. Hedge funds were also right about betting on PBR as the stock returned 27.5% and outperformed the market as well.

Best Performing Hedge Funds Strategy
Download a free copy of our newsletter and see the details inside!
Hedge Fund Resource Center
Related News
Is Petroleo Brasileiro S.A. – Petrobras (PBR) A Good Stock To Buy? Vale SA (ADR) (VALE), Diamond Offshore Drilling Inc (DO): What This Highly Bearish Fund Is Betting On? 16 Countries With The Biggest Oil Reserves In The World in 2017 40 Fresh Stories to Know How is it Going in the Financial Markets Today Wondering What’s Going On in the Financial Markets Today? Check Out These 36 Stories! 33 Fresh Stories To Inform You About The Financial Markets Today Billionaire Rob Citrone’s Monster Q3 Buys: Kellogg, Macy’s, Activision-Blizzard, More Ten of the Most Common Addictions 13 African Countries with the Largest White Population in 2018 6 Causes of Human Trafficking in Africa, India, and US
Billionaire Hedge Funds