Is Marriott Vacations Worldwide Corporation (NYSE:VAC) a buy, sell, or hold? Money managers are taking a bullish view. The number of bullish hedge fund positions increased by 1 lately. Our calculations also showed that VAC isn’t among the 30 most popular stocks among hedge funds (see the video below).

Today there are dozens of signals stock traders employ to evaluate publicly traded companies. Two of the less known signals are hedge fund and insider trading signals. Our experts have shown that, historically, those who follow the best picks of the best hedge fund managers can trounce the market by a healthy margin (see the details here). 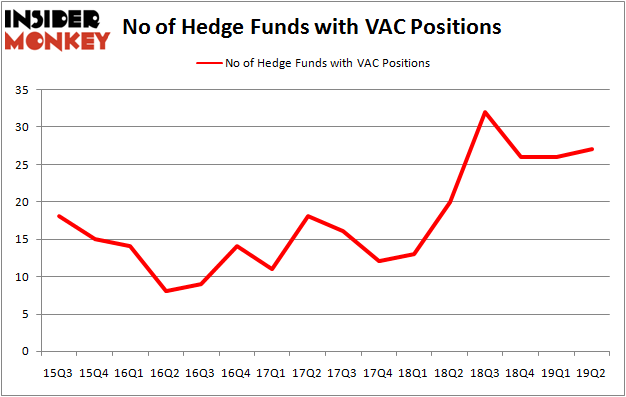 Unlike this former hedge fund manager who is convinced Dow will soar past 40000, our long-short investment strategy doesn’t rely on bull markets to deliver double digit returns. We only rely on hedge fund buy/sell signals. We’re going to take a peek at the new hedge fund action surrounding Marriott Vacations Worldwide Corporation (NYSE:VAC).

How have hedgies been trading Marriott Vacations Worldwide Corporation (NYSE:VAC)?

At Q2’s end, a total of 27 of the hedge funds tracked by Insider Monkey were bullish on this stock, a change of 4% from the first quarter of 2019. On the other hand, there were a total of 20 hedge funds with a bullish position in VAC a year ago. With the smart money’s capital changing hands, there exists a few notable hedge fund managers who were increasing their stakes significantly (or already accumulated large positions).

According to publicly available hedge fund and institutional investor holdings data compiled by Insider Monkey, Richard Mashaal’s Rima Senvest Management has the number one position in Marriott Vacations Worldwide Corporation (NYSE:VAC), worth close to $173.3 million, corresponding to 15.2% of its total 13F portfolio. Coming in second is David Cohen and Harold Levy of Iridian Asset Management, with a $127.8 million position; the fund has 1.8% of its 13F portfolio invested in the stock. Other professional money managers that hold long positions contain Wilmot B. Harkey and Daniel Mack’s Nantahala Capital Management, Brett Barakett’s Tremblant Capital and Israel Englander’s Millennium Management.

As industrywide interest jumped, key money managers have been driving this bullishness. Iridian Asset Management, managed by David Cohen and Harold Levy, assembled the biggest position in Marriott Vacations Worldwide Corporation (NYSE:VAC). Iridian Asset Management had $127.8 million invested in the company at the end of the quarter. Sahm Adrangi’s Kerrisdale Capital also initiated a $9.5 million position during the quarter. The other funds with new positions in the stock are Brad Farber’s Atika Capital, Matthew Knauer and Mina Faltas’s Nokota Management, and Richard Driehaus’s Driehaus Capital.

As you can see these stocks had an average of 19.25 hedge funds with bullish positions and the average amount invested in these stocks was $394 million. That figure was $443 million in VAC’s case. nVent Electric plc (NYSE:NVT) is the most popular stock in this table. On the other hand Ternium S.A. (NYSE:TX) is the least popular one with only 14 bullish hedge fund positions. Marriott Vacations Worldwide Corporation (NYSE:VAC) is not the most popular stock in this group but hedge fund interest is still above average. Our calculations showed that top 20 most popular stocks among hedge funds returned 24.4% in 2019 through September 30th and outperformed the S&P 500 ETF (SPY) by 4 percentage points. Hedge funds were also right about betting on VAC as the stock returned 7.9% during the third quarter and outperformed the market. Hedge funds were rewarded for their relative bullishness.