“Since 2006, value stocks (IVE vs IVW) have underperformed 11 of the 13 calendar years and when they beat growth, it wasn’t by much. Cumulatively, through this week, it has been a 122% differential (up 52% for value vs up 174% for growth). This appears to be the longest and most severe drought for value investors since data collection began. It will go our way eventually as there are too many people paying far too much for today’s darlings, both public and private. Further, the ten-year yield of 2.5% (pre-tax) isn’t attractive nor is real estate. We believe the value part of the global equity market is the only place to earn solid risk adjusted returns and we believe those returns will be higher than normal,” said Vilas Fund in its Q1 investor letter. We aren’t sure whether value stocks outperform growth, but we follow hedge fund investor letters to understand where the markets and stocks might be going. That’s why we believe it would be worthwhile to take a look at the hedge fund sentiment on Lamb Weston Holdings, Inc. (NYSE:LW) in order to identify whether reputable and successful top money managers continue to believe in its potential.

Lamb Weston Holdings, Inc. (NYSE:LW) was in 33 hedge funds’ portfolios at the end of the third quarter of 2019. LW shareholders have witnessed an increase in support from the world’s most elite money managers recently. There were 29 hedge funds in our database with LW holdings at the end of the previous quarter. Our calculations also showed that LW isn’t among the 30 most popular stocks among hedge funds (click for Q3 rankings and see the video below for Q2 rankings). 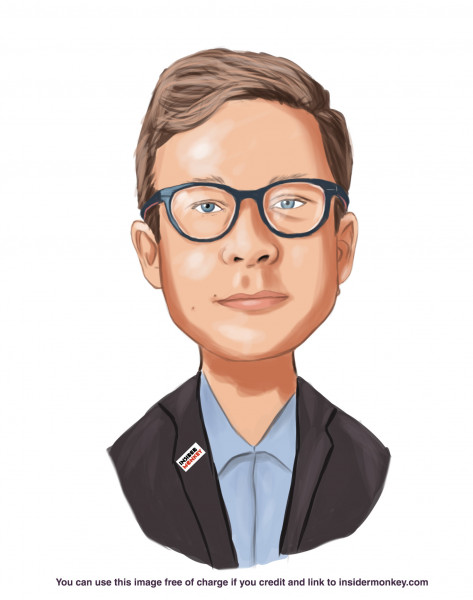 Per Johansson of Bodenholm Capital

Unlike the largest US hedge funds that are convinced Dow will soar past 40,000 or the world’s most bearish hedge fund that’s more convinced than ever that a crash is coming, our long-short investment strategy doesn’t rely on bull or bear markets to deliver double digit returns. We only rely on the best performing hedge funds‘ buy/sell signals. Let’s analyze the recent hedge fund action regarding Lamb Weston Holdings, Inc. (NYSE:LW).

How have hedgies been trading Lamb Weston Holdings, Inc. (NYSE:LW)? 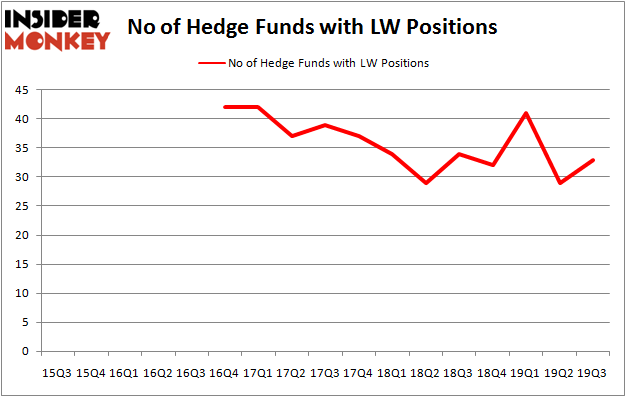 When looking at the institutional investors followed by Insider Monkey, Paul Marshall and Ian Wace’s Marshall Wace has the number one position in Lamb Weston Holdings, Inc. (NYSE:LW), worth close to $61.3 million, comprising 0.5% of its total 13F portfolio. The second most bullish fund manager is Oscar Hattink of BlueDrive Global Investors, with a $47.9 million position; 14.3% of its 13F portfolio is allocated to the company. Some other hedge funds and institutional investors with similar optimism contain Lee Hicks and Jan Koerner’s Park Presidio Capital, Ryan Pedlow’s Two Creeks Capital Management and Cliff Asness’s AQR Capital Management. In terms of the portfolio weights assigned to each position BlueDrive Global Investors allocated the biggest weight to Lamb Weston Holdings, Inc. (NYSE:LW), around 14.31% of its portfolio. Bodenholm Capital is also relatively very bullish on the stock, earmarking 12.05 percent of its 13F equity portfolio to LW.

As aggregate interest increased, key money managers have been driving this bullishness. BlueDrive Global Investors, managed by Oscar Hattink, assembled the most valuable position in Lamb Weston Holdings, Inc. (NYSE:LW). BlueDrive Global Investors had $47.9 million invested in the company at the end of the quarter. Lee Hicks and Jan Koerner’s Park Presidio Capital also made a $47.3 million investment in the stock during the quarter. The following funds were also among the new LW investors: Per Johansson’s Bodenholm Capital, Anand Parekh’s Alyeska Investment Group, and Christopher C. Grisanti’s Grisanti Brown & Partners.

As you can see these stocks had an average of 26.75 hedge funds with bullish positions and the average amount invested in these stocks was $629 million. That figure was $439 million in LW’s case. E*TRADE Financial Corporation (NASDAQ:ETFC) is the most popular stock in this table. On the other hand UGI Corp (NYSE:UGI) is the least popular one with only 19 bullish hedge fund positions. Lamb Weston Holdings, Inc. (NYSE:LW) is not the most popular stock in this group but hedge fund interest is still above average. Our calculations showed that top 20 most popular stocks among hedge funds returned 37.4% in 2019 through the end of November and outperformed the S&P 500 ETF (SPY) by 9.9 percentage points. Hedge funds were also right about betting on LW as the stock returned 15.8% during the fourth quarter (through the end of November) and outperformed the market. Hedge funds were rewarded for their relative bullishness.