The latest 13F reporting period has come and gone, and Insider Monkey is again at the forefront when it comes to making use of this gold mine of data. We have processed the filings of the more than 700 world-class investment firms that we track and now have access to the collective wisdom contained in these filings, which are based on their June 28 holdings, data that is available nowhere else. Should you consider CSG Systems International, Inc. (NASDAQ:CSGS) for your portfolio? We’ll look to this invaluable collective wisdom for the answer.

Is CSG Systems International, Inc. (NASDAQ:CSGS) a bargain? Investors who are in the know are in a bullish mood. The number of bullish hedge fund bets rose by 1 recently. Our calculations also showed that CSGS isn’t among the 30 most popular stocks among hedge funds (see the video below). CSGS was in 18 hedge funds’ portfolios at the end of June. There were 17 hedge funds in our database with CSGS positions at the end of the previous quarter.

In the financial world there are several methods market participants employ to evaluate publicly traded companies. A duo of the most innovative methods are hedge fund and insider trading moves. Our researchers have shown that, historically, those who follow the top picks of the elite investment managers can beat their index-focused peers by a significant margin (see the details here). 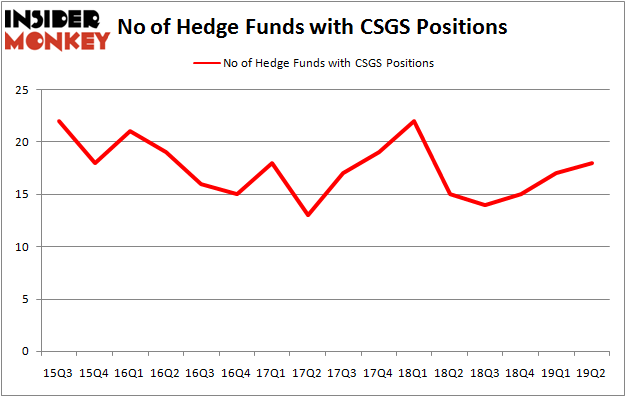 Heading into the third quarter of 2019, a total of 18 of the hedge funds tracked by Insider Monkey were long this stock, a change of 6% from the previous quarter. Below, you can check out the change in hedge fund sentiment towards CSGS over the last 16 quarters. With hedge funds’ positions undergoing their usual ebb and flow, there exists a few key hedge fund managers who were boosting their stakes considerably (or already accumulated large positions).

More specifically, Renaissance Technologies was the largest shareholder of CSG Systems International, Inc. (NASDAQ:CSGS), with a stake worth $113.4 million reported as of the end of March. Trailing Renaissance Technologies was Polar Capital, which amassed a stake valued at $33.9 million. Arrowstreet Capital, Millennium Management, and Citadel Investment Group were also very fond of the stock, giving the stock large weights in their portfolios.

As one would reasonably expect, key hedge funds were breaking ground themselves. Winton Capital Management, managed by David Harding, created the largest position in CSG Systems International, Inc. (NASDAQ:CSGS). Winton Capital Management had $2.3 million invested in the company at the end of the quarter. Hoon Kim’s Quantinno Capital also initiated a $0.5 million position during the quarter.

As you can see these stocks had an average of 10.25 hedge funds with bullish positions and the average amount invested in these stocks was $60 million. That figure was $215 million in CSGS’s case. NOW Inc (NYSE:DNOW) is the most popular stock in this table. On the other hand First Majestic Silver Corp (NYSE:AG) is the least popular one with only 9 bullish hedge fund positions. Compared to these stocks CSG Systems International, Inc. (NASDAQ:CSGS) is more popular among hedge funds. Our calculations showed that top 20 most popular stocks among hedge funds returned 24.4% in 2019 through September 30th and outperformed the S&P 500 ETF (SPY) by 4 percentage points. Hedge funds were also right about betting on CSGS as the stock returned 6.3% during Q3 and outperformed the market by an even larger margin. Hedge funds were clearly right about piling into this stock relative to other stocks with similar market capitalizations.