The financial regulations require hedge funds and wealthy investors that crossed the $100 million equity holdings threshold to file a report that shows their positions at the end of every quarter. Even though it isn’t the intention, these filings to a certain extent level the playing field for ordinary investors. The latest round of 13F filings disclosed the funds’ positions on June 28th. We at Insider Monkey have made an extensive database of nearly 750 of those established hedge funds and famous value investors’ filings. In this article, we analyze how these elite funds and prominent investors traded Azul S.A. (NYSE:AZUL) based on those filings. 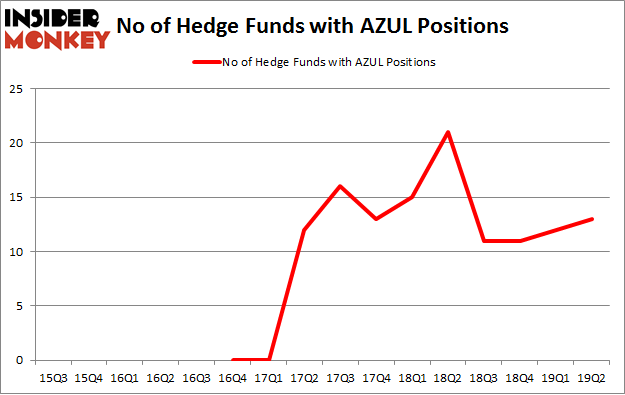 According to Insider Monkey’s hedge fund database, Howard Marks’s Oaktree Capital Management has the biggest position in Azul S.A. (NYSE:AZUL), worth close to $50.7 million, amounting to 1% of its total 13F portfolio. On Oaktree Capital Management’s heels is Millennium Management, led by Israel Englander, holding a $35.5 million position; the fund has 0.1% of its 13F portfolio invested in the stock. Other professional money managers that are bullish consist of Joe DiMenna’s ZWEIG DIMENNA PARTNERS, Mark Moore’s ThornTree Capital Partners and Jon Bauer’s Contrarian Capital.

As aggregate interest increased, key hedge funds were breaking ground themselves. Springbok Capital, managed by Gavin Saitowitz and Cisco J. del Valle, initiated the largest position in Azul S.A. (NYSE:AZUL). Springbok Capital had $0.6 million invested in the company at the end of the quarter. Matthew Tewksbury’s Stevens Capital Management also made a $0.3 million investment in the stock during the quarter. The only other fund with a new position in the stock is Paul Tudor Jones’s Tudor Investment Corp.

Let’s now review hedge fund activity in other stocks – not necessarily in the same industry as Azul S.A. (NYSE:AZUL) but similarly valued. We will take a look at Outfront Media Inc (NYSE:OUT), Pebblebrook Hotel Trust (NYSE:PEB), Umpqua Holdings Corporation (NASDAQ:UMPQ), and LogMeIn Inc (NASDAQ:LOGM). All of these stocks’ market caps are similar to AZUL’s market cap.

As you can see these stocks had an average of 20.5 hedge funds with bullish positions and the average amount invested in these stocks was $264 million. That figure was $174 million in AZUL’s case. LogMeIn Inc (NASDAQ:LOGM) is the most popular stock in this table. On the other hand Pebblebrook Hotel Trust (NYSE:PEB) is the least popular one with only 13 bullish hedge fund positions. Compared to these stocks Azul S.A. (NYSE:AZUL) is even less popular than PEB. Hedge funds clearly dropped the ball on AZUL as the stock delivered strong returns, though hedge funds’ consensus picks still generated respectable returns. Our calculations showed that top 20 most popular stocks among hedge funds returned 24.4% in 2019 through September 30th and outperformed the S&P 500 ETF (SPY) by 4 percentage points. A small number of hedge funds were also right about betting on AZUL as the stock returned 7.1% during the third quarter and outperformed the market by an even larger margin.