We at Insider Monkey have gone over 700 13F filings that hedge funds and prominent investors are required to file by the SEC The 13F filings show the funds’ and investors’ portfolio positions as of December 31st. In this article, we look at what those funds think of Kinder Morgan Inc (NYSE:KMI) based on that data.

Heading into the first quarter of 2019, a total of 48 of the hedge funds tracked by Insider Monkey held long positions in this stock, a change of -4% from one quarter earlier. The graph below displays the number of hedge funds with bullish position in KMI over the last 14 quarters. So, let’s see which hedge funds were among the top holders of the stock and which hedge funds were making big moves. 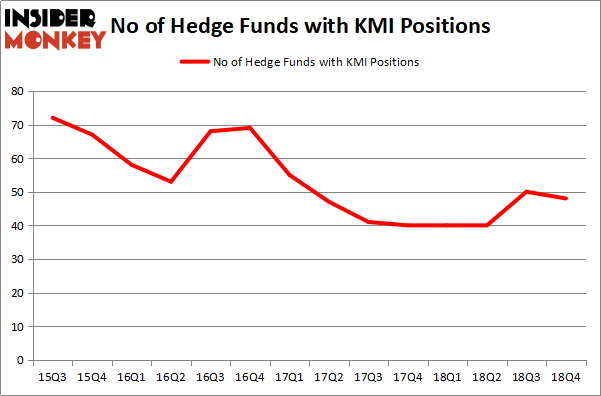 The largest stake in Kinder Morgan Inc (NYSE:KMI) was held by FPR Partners, which reported holding $447.5 million worth of stock at the end of September. It was followed by First Pacific Advisors LLC with a $265.7 million position. Other investors bullish on the company included Renaissance Technologies, Millennium Management, and Abrams Capital Management.

Seeing as Kinder Morgan Inc (NYSE:KMI) has faced declining sentiment from the smart money, it’s easy to see that there is a sect of funds that elected to cut their positions entirely last quarter. Intriguingly, Charles Clough’s Clough Capital Partners said goodbye to the biggest stake of all the hedgies watched by Insider Monkey, worth about $17 million in stock, and Ed Bosek’s BeaconLight Capital was right behind this move, as the fund dumped about $9.8 million worth. These transactions are intriguing to say the least, as aggregate hedge fund interest dropped by 2 funds last quarter.

As you can see these stocks had an average of 25.5 hedge funds with bullish positions and the average amount invested in these stocks was $554 million. That figure was $1659 million in KMI’s case. Fidelity National Information Services Inc. (NYSE:FIS) is the most popular stock in this table. On the other hand Royal Bank of Scotland Group plc (NYSE:RBS) is the least popular one with only 3 bullish hedge fund positions. Compared to these stocks Kinder Morgan Inc (NYSE:KMI) is more popular among hedge funds. Our calculations showed that top 15 most popular stocks among hedge funds returned 19.7% through March 15th and outperformed the S&P 500 ETF (SPY) by 6.6 percentage points. Hedge funds were also right about betting on KMI as the stock returned 30.6% and outperformed the market as well.