Before we spend days researching a stock idea we like to take a look at how hedge funds and billionaire investors recently traded that stock. Russell 2000 ETF (IWM) lagged the larger S&P 500 ETF (SPY) by more than 10 percentage points since the end of the third quarter of 2018. This means hedge funds that are allocating a higher percentage of their portfolio to small-cap stocks were probably underperforming the market. However, this also means that as small-cap stocks start to mean revert, these hedge funds will start delivering better returns than the S&P 500 Index funds. In this article, we will take a look at what hedge funds think about Chimera Investment Corporation (NYSE:CIM).

Is Chimera Investment Corporation (NYSE:CIM) a buy, sell, or hold? The best stock pickers are becoming hopeful. The number of bullish hedge fund positions moved up by 3 in recent months. Our calculations also showed that CIM isn’t among the 30 most popular stocks among hedge funds (view the video below).

Unlike former hedge manager, Dr. Steve Sjuggerud, who is convinced Dow will soar past 40000, our long-short investment strategy doesn’t rely on bull markets to deliver double digit returns. We only rely on hedge fund buy/sell signals. We’re going to take a gander at the new hedge fund action regarding Chimera Investment Corporation (NYSE:CIM). 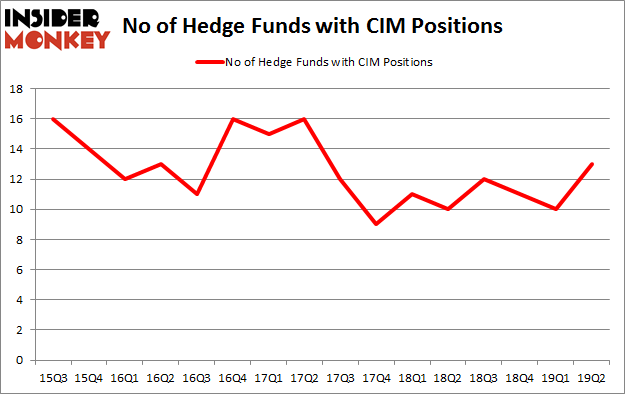 More specifically, Omega Advisors was the largest shareholder of Chimera Investment Corporation (NYSE:CIM), with a stake worth $90.1 million reported as of the end of March. Trailing Omega Advisors was Renaissance Technologies, which amassed a stake valued at $12.9 million. Miller Value Partners, Citadel Investment Group, and Winton Capital Management were also very fond of the stock, giving the stock large weights in their portfolios.

As aggregate interest increased, specific money managers have been driving this bullishness. Miller Value Partners, managed by Bill Miller, initiated the most outsized position in Chimera Investment Corporation (NYSE:CIM). Miller Value Partners had $4.2 million invested in the company at the end of the quarter. D. E. Shaw’s D E Shaw also initiated a $0.8 million position during the quarter. The other funds with new positions in the stock are Matthew Hulsizer’s PEAK6 Capital Management, Israel Englander’s Millennium Management, and Claes Fornell’s CSat Investment Advisory.

As you can see these stocks had an average of 23 hedge funds with bullish positions and the average amount invested in these stocks was $194 million. That figure was $116 million in CIM’s case. Macquarie Infrastructure Corporation (NYSE:MIC) is the most popular stock in this table. On the other hand Glacier Bancorp, Inc. (NASDAQ:GBCI) is the least popular one with only 17 bullish hedge fund positions. Compared to these stocks Chimera Investment Corporation (NYSE:CIM) is even less popular than GBCI. Hedge funds clearly dropped the ball on CIM as the stock delivered strong returns, though hedge funds’ consensus picks still generated respectable returns. Our calculations showed that top 20 most popular stocks among hedge funds returned 24.4% in 2019 through September 30th and outperformed the S&P 500 ETF (SPY) by 4 percentage points. A small number of hedge funds were also right about betting on CIM as the stock returned 6.3% during the third quarter and outperformed the market by an even larger margin.