Were Hedge Funds Right About Bank of America Corporation (BAC)?

Is Bank of America Corporation (NYSE:BAC) an excellent investment today? The best stock pickers are taking a bearish view. The number of long hedge fund positions went down by 3 in recent months. Our calculations also showed that BAC is among the 30 most popular stocks among hedge funds, ranking 11th.

Let’s take a peek at the fresh hedge fund action regarding Bank of America Corporation (NYSE:BAC).

How have hedgies been trading Bank of America Corporation (NYSE:BAC)? 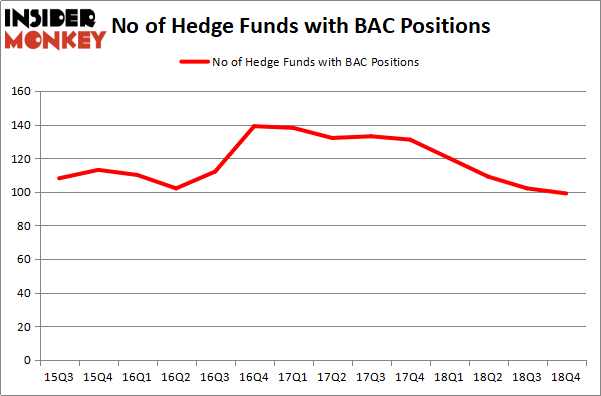 The largest stake in Bank of America Corporation (NYSE:BAC) was held by Berkshire Hathaway, which reported holding $22081.6 million worth of stock at the end of September. It was followed by Lansdowne Partners with a $425.3 million position. Other investors bullish on the company included Pzena Investment Management, Theleme Partners, and First Pacific Advisors.

Seeing as Bank of America Corporation (NYSE:BAC) has experienced falling interest from the aggregate hedge fund industry, it’s safe to say that there was a specific group of hedge funds that elected to cut their positions entirely last quarter. Intriguingly, John Armitage’s Egerton Capital Limited sold off the largest position of all the hedgies watched by Insider Monkey, valued at about $351 million in call options. Julian Robertson’s fund, Tiger Management, also dumped its call options, about $109.9 million worth. These bearish behaviors are intriguing to say the least, as total hedge fund interest dropped by 3 funds last quarter.

As you can see these stocks had an average of 70.25 hedge funds with bullish positions and the average amount invested in these stocks was $10830 million. That figure was $27371 million in BAC’s case. UnitedHealth Group Inc. (NYSE:UNH) is the most popular stock in this table. On the other hand The Procter & Gamble Company (NYSE:PG) is the least popular one with only 60 bullish hedge fund positions. Compared to these stocks Bank of America Corporation (NYSE:BAC) is more popular among hedge funds. Our calculations showed that top 15 most popular stocks among hedge funds returned 19.7% through March 15th and outperformed the S&P 500 ETF (SPY) by 6.6 percentage points. Hedge funds were also right about betting on BAC as the stock returned 19.5% and outperformed the market as well.