Hedge funds and large money managers usually invest with a focus on the long-term horizon and, therefore, short-lived dips on the charts, usually don’t make them change their opinion towards a company. This time it may be different. During the fourth quarter of 2018 we observed increased volatility and small-cap stocks underperformed the market. Hedge fund investor letters indicated that they are cutting their overall exposure, closing out some position and doubling down on others. Let’s take a look at the hedge fund sentiment towards Amgen, Inc. (NASDAQ:AMGN) to find out whether it was one of their high conviction long-term ideas.

Amgen, Inc. (NASDAQ:AMGN) has seen an increase in activity from the world’s largest hedge funds of late. AMGN was in 46 hedge funds’ portfolios at the end of the fourth quarter of 2018. There were 42 hedge funds in our database with AMGN positions at the end of the previous quarter. Our calculations also showed that AMGN isn’t among the 30 most popular stocks among hedge funds.

What does the smart money think about Amgen, Inc. (NASDAQ:AMGN)?

At Q4’s end, a total of 46 of the hedge funds tracked by Insider Monkey were long this stock, a change of 10% from the previous quarter. By comparison, 44 hedge funds held shares or bullish call options in AMGN a year ago. Overall, hedge fund sentiment over the last 3.5 years is getting bearish though. So, let’s see which hedge funds were among the top holders of the stock and which hedge funds were making big moves. 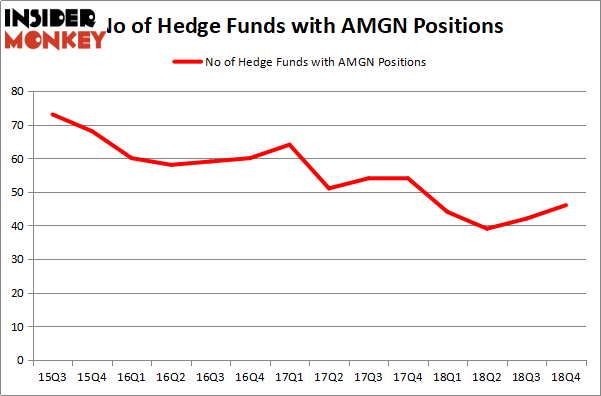 More specifically, Renaissance Technologies was the largest shareholder of Amgen, Inc. (NASDAQ:AMGN), with a stake worth $696.6 million reported as of the end of September. Trailing Renaissance Technologies was AQR Capital Management, which amassed a stake valued at $600.6 million. Two Sigma Advisors, Pzena Investment Management, and Arrowstreet Capital were also very fond of the stock, giving the stock large weights in their portfolios.

Now, key money managers were breaking ground themselves. Chiron Investment Management, managed by Ryan Caldwell, established the most outsized position in Amgen, Inc. (NASDAQ:AMGN). Chiron Investment Management had $56.9 million invested in the company at the end of the quarter. Benjamin A. Smith’s Laurion Capital Management also made a $19.8 million investment in the stock during the quarter. The following funds were also among the new AMGN investors: Michael Kharitonov and Jon David McAuliffe’s Voleon Capital, Nick Niell’s Arrowgrass Capital Partners, and Arthur B Cohen and Joseph Healey’s Healthcor Management LP.

As you can see these stocks had an average of 45.75 hedge funds with bullish positions and the average amount invested in these stocks was $2351 million. That figure was $3086 million in AMGN’s case. DowDuPont Inc. (NYSE:DWDP) is the most popular stock in this table. On the other hand SAP SE (NYSE:SAP) is the least popular one with only 14 bullish hedge fund positions. Amgen, Inc. (NASDAQ:AMGN) is not the most popular stock in this group and hedge fund interest is on a downward trajectory over the last 3.5 years. Our calculations showed that top 15 most popular stocks among hedge funds returned 19.7% through March 15th and outperformed the S&P 500 ETF (SPY) by 6.6 percentage points. Unfortunately AMGN wasn’t in this group. Hedge funds that bet on AMGN were disappointed as the stock lost 1% and underperformed the market. If you are interested in investing in large cap stocks, you should check out the top 15 hedge fund stocks as 13 of these outperformed the market.

Here is What Hedge Funds Think About Cisco Systems, Inc. (CSCO)
Monthly Newsletter Strategy
Download a free copy of our newsletter and see the details inside!
Hedge Fund Resource Center
Related News
Is Amgen, Inc. (AMGN) A Good Stock To Buy? 5 Best Quant Hedge Funds’ 5 Top Picks 15 Best Selling Most Profitable Drugs of All Time Top 75 Healthcare Dividend Stocks To Invest In 15 Biggest Healthcare Companies in USA Here’s How This Week Has Started For The Financial Markets Esperion Therapeutics Inc (ESPR): Get It While It’s Cheap Ten of the Most Common Addictions 13 African Countries with the Largest White Population in 2018 6 Causes of Human Trafficking in Africa, India, and US
Billionaire Hedge Funds