Were Hedge Funds Right About Abbott Laboratories (ABT)?

In these volatile markets we scrutinize hedge fund filings to get a reading on which direction each stock might be going. After several tireless days we have finished crunching the numbers from nearly 835 13F filings issued by the elite hedge funds and other investment firms that we track at Insider Monkey, which disclosed those firms’ equity portfolios as of December 31st. The results of that effort will be put on display in this article, as we share valuable insight into the smart money sentiment towards Abbott Laboratories (NYSE:ABT).

Is Abbott Laboratories (NYSE:ABT) worth your attention right now? Investors who are in the know are getting less bullish. The number of bullish hedge fund bets were cut by 3 recently. Our calculations also showed that ABT isn’t among the 30 most popular stocks among hedge funds (click for Q4 rankings and see the video at the end of this article for Q3 rankings). ABT was in 62 hedge funds’ portfolios at the end of December. There were 65 hedge funds in our database with ABT positions at the end of the previous quarter.

We leave no stone unturned when looking for the next great investment idea. For example, this trader is claiming triple digit returns, so we check out his latest trade recommendations. Federal Reserve and Central Banks all around world are printing money like there is no tomorrow, so we check out this this precious metals expert’s stock pick. We read hedge fund investor letters and listen to stock pitches at hedge fund conferences (by the way watch this video if you want to hear one of the best healthcare hedge fund manager’s coronavirus analysis). Our best call in 2020 was shorting the market when S&P 500 was trading at 3150 after realizing the coronavirus pandemic’s significance before most investors. Now let’s take a gander at the new hedge fund action surrounding Abbott Laboratories (NYSE:ABT).

At the end of the fourth quarter, a total of 62 of the hedge funds tracked by Insider Monkey were long this stock, a change of -5% from the previous quarter. On the other hand, there were a total of 51 hedge funds with a bullish position in ABT a year ago. With hedge funds’ positions undergoing their usual ebb and flow, there exists an “upper tier” of key hedge fund managers who were upping their holdings meaningfully (or already accumulated large positions). 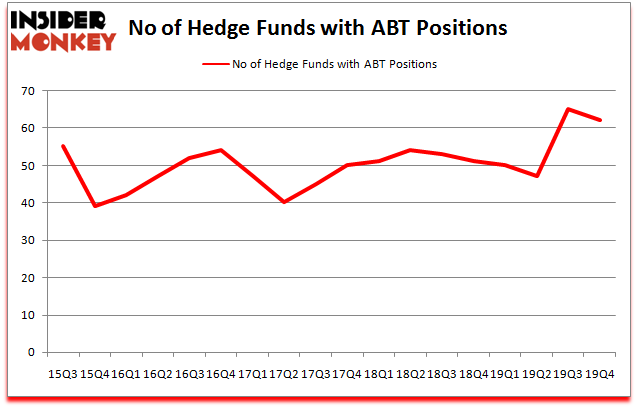 More specifically, GQG Partners was the largest shareholder of Abbott Laboratories (NYSE:ABT), with a stake worth $653.8 million reported as of the end of September. Trailing GQG Partners was Diamond Hill Capital, which amassed a stake valued at $554.4 million. Adage Capital Management, Sirios Capital Management, and Duquesne Capital were also very fond of the stock, becoming one of the largest hedge fund holders of the company. In terms of the portfolio weights assigned to each position Sirios Capital Management allocated the biggest weight to Abbott Laboratories (NYSE:ABT), around 5.35% of its 13F portfolio. GQG Partners is also relatively very bullish on the stock, designating 4.51 percent of its 13F equity portfolio to ABT.

Judging by the fact that Abbott Laboratories (NYSE:ABT) has faced falling interest from the aggregate hedge fund industry, it’s safe to say that there exists a select few money managers that elected to cut their entire stakes in the third quarter. It’s worth mentioning that Arthur B Cohen and Joseph Healey’s Healthcor Management LP said goodbye to the biggest investment of the 750 funds watched by Insider Monkey, comprising an estimated $63.3 million in stock. Brian Ashford-Russell and Tim Woolley’s fund, Polar Capital, also dropped its stock, about $46.8 million worth. These transactions are important to note, as total hedge fund interest dropped by 3 funds in the third quarter.

As you can see these stocks had an average of 55 hedge funds with bullish positions and the average amount invested in these stocks was $2892 million. That figure was $2056 million in ABT’s case. Bristol Myers Squibb Company (NYSE:BMY) is the most popular stock in this table. On the other hand The Unilever Group (NYSE:UN) is the least popular one with only 15 bullish hedge fund positions. Abbott Laboratories (NYSE:ABT) is not the most popular stock in this group but hedge fund interest is still above average. Our calculations showed that top 10 most popular stocks among hedge funds returned 41.4% in 2019 and outperformed the S&P 500 ETF (SPY) by 10.1 percentage points. These stocks lost 1.0% in 2020 through April 20th but still beat the market by 11 percentage points. Hedge funds were also right about betting on ABT as the stock returned 13.8% in 2020 (through April 20th) and outperformed the market. Hedge funds were rewarded for their relative bullishness.