It is already common knowledge that individual investors do not usually have the necessary resources and abilities to properly research an investment opportunity. As a result, most investors pick their illusory “winners” by making a superficial analysis and research that leads to poor performance on aggregate. Since stock returns aren’t usually symmetrically distributed and index returns are more affected by a few outlier stocks (i.e. the FAANG stocks dominating and driving S&P 500 Index’s returns in recent years), more than 50% of the constituents of the Standard and Poor’s 500 Index underperform the benchmark. Hence, if you randomly pick a stock, there is more than 50% chance that you’d fail to beat the market. At the same time, the 30 most favored S&P 500 stocks by the hedge funds monitored by Insider Monkey generated a return of 15.1% over the last 12 months (vs. 5.6% gain for SPY), with 53% of these stocks outperforming the benchmark. Of course, hedge funds do make wrong bets on some occasions and these get disproportionately publicized on financial media, but piggybacking their moves can beat the broader market on average. That’s why we are going to go over recent hedge fund activity in Weight Watchers International, Inc. (NYSE:WTW).

Is Weight Watchers International, Inc. (NYSE:WTW) a good investment right now? Money managers are becoming more confident. The number of long hedge fund bets moved up by 3 lately, and the company was in 31 hedge funds portfolios at the end of the third quarter. This wasn’t enough for it to secure a place on the list of 30 most popular stocks among hedge funds in Q3 of 2018.

Weight Watchers International is a company that provides various services and products for the purpose of helping its customer stick with the healthy way of living. Some of the healthy habits the company is trying to help its customers attain include working out, controlling their weight, and having a positive mindset.

Over the past six months, the company stock price lost 42.11%. 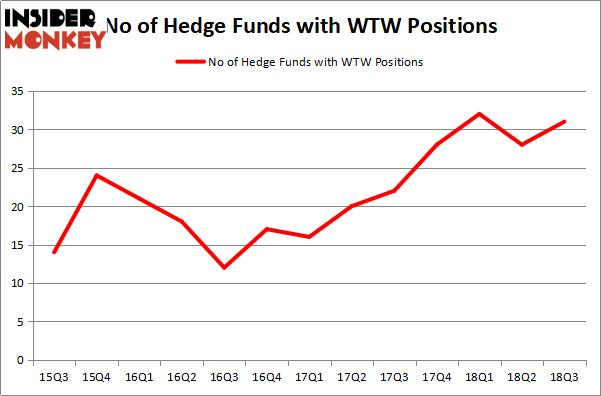 Of the funds tracked by Insider Monkey, Israel Englander’s Millennium Management has the most valuable position in Weight Watchers International, Inc. (NYSE:WTW), worth close to $74.9 million, accounting for 0.1% of its total 13F portfolio. On Millennium Management’s heels is 12 West Capital Management, managed by Joel Ramin, which holds a $66.8 million position; the fund has 4.9% of its 13F portfolio invested in the stock. Other peers with similar optimism comprise Ken Griffin’s Citadel Investment Group, D. E. Shaw’s D E Shaw and Brian Gustavson and Andrew Haley’s 1060 Capital Management.

As you can see these stocks had an average of 23 hedge funds with bullish positions and the average amount invested in these stocks was $529 million. That figure was $342 million in WTW’s case. Conduent Incorporated (NYSE:CNDT) is the most popular stock in this table. On the other hand Shell Midstream Partners LP (NYSE:SHLX) is the least popular one with only 6 bullish hedge fund positions. Weight Watchers International, Inc. (NYSE:WTW) is not the most popular stock in this group but hedge fund interest is still above average. This is a slightly positive signal but we’d rather spend our time researching stocks that hedge funds are piling on. In this regard CNDT might be a better candidate to consider a long position.