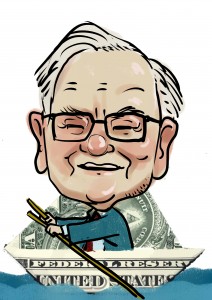 Buffett picks up a gem in SA (BDLive)
THE world’s most successful investor, Warren Buffett, has bought a South African jewellery manufacturer — his first investment in the country. The Richline Group, owned by Berkshire Hathaway, has bought the assets of South African Manufacturing Jewellers, which is in a business rescue programme. The company also trades as Alan Mair Manufacturing Jewellers. Richline, which specialises in precious metals, gemstones and design, plans to revitalise the company and use it as a platform to export into Africa, Australia and the UK. Richline SA MD Johan Bezuidenhout said the company would become a world-class manufacturer.

Buffett’s Wells Fargo play keys on Bernanke (MSN)
After Wells Fargo & Company (NYSE:WFC) posted generally mixed third-quarter earnings and a drop in key interest-rate-based revenue that augurs poorly for 2013, the bank’s largest investor, Warren Buffett of Berkshire Hathaway (BRK.A +0.33%), faces one of his biggest post-crisis investing challenges. Should the Oracle of Omaha stick it out with Wells Fargo — the top lender to the recovering U.S. housing market — and fight the Federal Reserve over the impact of falling interest rates on bank earnings? Or should Buffett begin to cash in his chips on what’s been a successful bank stock recovery trade that’s outperformed other highly watched financial sector investments?

How to Invest Like Warren Buffett (HispanicBusiness)
Is Warren Buffett, the octogenarian billionaire and “Sage of Omaha,” a model for small investors to imitate, or are his methods more suited for corporate titans than for the commoner? You be the judge. A site that bills itself as “your free source to invest like Buffett” is divided into three “courses”: introductory lessons in so-called value investing, followed by intermediate and advanced lessons in Buffetteering. The site was developed by Buffettologist Preston Pysh, who has a book, Warren Buffett’s Three Favorite Books. Value investors look for stocks and bonds that can be bought at what appears to be bargain prices, on the theory that those investments should increase in value over time.

Romney or Obama? It’s a No-brainer (AmericanThinker)
Warren Buffett, founder of Berkshire Hathaway, has made billions of dollars for himself and his investors by betting on the movement of stocks, bonds, commodities, and other investments. He is a guru in the financial services industry. Before he died, Steve Jobs was the brains behind Apple Inc. (NASDAQ:AAPL). Many years ago, he recognized a developing opportunity in the delivery to consumers of digital music and other digitized products.That led to iTunes, the iPod, and other Apple products. While Napster was going head-to-head with the Justice Department, Jobs was busily preparing his company to lead the way to the digital future — legally. In the process, he made a fortune for himself and for those who were wise enough to buy Apple stock. But for every Buffett and Jobs, there are countless wannabes and pretenders in business.

ASCC To Follow Elite Investors’ Lead On Vodka (TheStreet)
Elite global investor Warren Buffett loves the beverage industry – and so does the Aristocrat Group Corp. (OTCBB: ASCC). In recent years, McLane, a wholly-owned subsidiary of Buffett’s Berkshire Hathaway, has bought up domestic liquor distributors in Tennessee, Georgia and North Carolina. In the middle of the worst recession in generations, Buffett said that the acquisitions were about “developing new opportunities to innovate, grow and lead the beverage industry.” It’s easy to see why one of the world’s top investors thinks so highly of the liquor business. It’s an industry whose product enjoys the loyalty of tens of millions of consumers with no chance of being displaced by technology. In Buffett’s own terms, the distilled spirits industry is a simple business that’s easy to understand.

Mining equipment maker Joy Global could bring investors happiness (TheGlobeAndMail)
Despite working at an investment bank in Toronto for nearly a decade, I have always avoided investments in the commodity sector. As a value investor and student of Warren Buffett, I look for stable businesses with pricing power than can earn abnormally high returns. Commodity producers don’t qualify because they compete primarily on price with little or nothing to differentiate their offerings. But I recently made an exception to my commodity-sector aversion when I purchased shares in Joy Global Inc. Joy is a Milwaukee-based company that makes high-productivity mining equipment. Its customers are major global miners – high volume producers who demand equipment that helps them mine ore at the lowest cost per ton.

Weizhen Tang at fraud trial: ‘I’m a financier, just like George Soros’ (TheStar)
Weizhen Tang, the self-proclaimed Chinese Warren Buffett now facing a charge of fraud, testified that he made a 40 per cent return trading mututal funds while working as a researcher at Toronto’s Hospital for Sick Children. Tang testified in his own defence Monday, with occasional help from an interpreter. He said he was so successful that members of the Chinese community came to him in droves. Tang testified that he later created a fund that traded mututal funds and turned $4,000 into $4 million.

See’s Candies opening sweets shop in San Antonio (BizJournals)
See’s Candies, the iconic confectionery company owned by Warren Buffett’s Berkshire Hathaway, is opening a new candy shop at North Star Mall in San Antonio. See’s Candies will host its grand opening on Friday, Oct. 19. This will be the company’s fifth opening in Texas this year and See’s first shop in the Alamo City. The company sells over 100 varieties of candies and chocolates at its stores. The See family founded the company in 1921. Omaha, Neb.-based Berkshire Hathaway (NYSE: BRK.A, BRK.B) bought the firm in 1972. San Francisco-based See’s operates more than 200 locations across the United States.

Was Warren Buffett Wrong About This Tech Giant? (MSNBC)
Warren Buffett may be the most emulated money manager in the history of finance, let alone the past century. Unlike his mentor Benjamin Graham, Buffett believed that companies don’t have to be bought at a bargain to generate exceptional returns. Assuming a company is fairly priced, generates consistent profits, and has a competitive advantage stemming from a unique or low cost product/service, there is always an opportunity to beat the market. In most cases, Buffett and his team hold onto these companies for at least 5, 10, or even 20 years, so that’s why it was so surprising when the they sold their entire Intel Corporation (NASDAQ:INTC) position less than year after initiating it.

CU Vs. JJC: How They’ve Performed So Far In 2012
Monthly Newsletter Strategy
Download a free copy of our newsletter and see the details inside!
Hedge Fund Resource Center
Billionaire Hedge Funds