On Thursday morning, Wal-Mart Stores, Inc. (NYSE:WMT) reported fourth-quarter EPS of $1.67, ahead of analyst estimates for EPS of $1.57. The earnings beat was especially welcome after reports surfaced last week about poor sales trends in January and early February. The better-than-feared earnings report led to a relief rally on Thursday, with shares gaining 1.5% in a down market.

Not so fast
However, the Wal-Mart earnings report was weaker than it may have appeared at first glance. The company posted 11% EPS growth, but this was largely attributable to one-time tax benefits. If we ignore the change in Wal-Mart’s effective tax rate, earnings growth was anemic; pre-tax income grew by just 3%. In the U.S., which represents more than 70% of Wal-Mart’s sales, the company posted a comparable-store sales increase of 1.3% (including Sam’s Club warehouses). Total company sales grew by 3.9%, helped by new store openings and better sales growth in international markets.

Wal-Mart’s guidance was also uninspiring. For Wal-Mart U.S., the largest operating segment, management confirmed last week’s rumors of a slow start to February. Management primarily blamed delayed income tax refunds compared to 2012 for the weak sales trends. The sales trend apparently improved late last week, but it is too early to know whether that improvement is sustainable.

As a result of the weakness at the beginning of the first quarter, Wal-Mart U.S. is projecting flat comparable-store sales this quarter. The Sam’s Club warehouse segment projects comp sales flat to up 2%. Furthermore, Wal-Mart guided first-quarter EPS at $1.11 to $1.16, somewhat better than last year’s first quarter, but below the average analyst estimate of $1.18. The midpoint of Wal-Mart’s full-year EPS guidance of $5.20 to $5.40 was also below expectations.

At 14 times trailing earnings, Wal-Mart is not particularly cheap compared to other major retailers. Wal-Mart’s P/E is higher than that of Target Corporation (NYSE:TGT), Macy’s, Inc. (NYSE:M), and Kohl’s Corporation (NYSE:KSS). Costco Wholesale Corporation (NASDAQ:COST) does have a significantly higher valuation, but also offers high-single-digit revenue growth, unlike Wal-Mart. 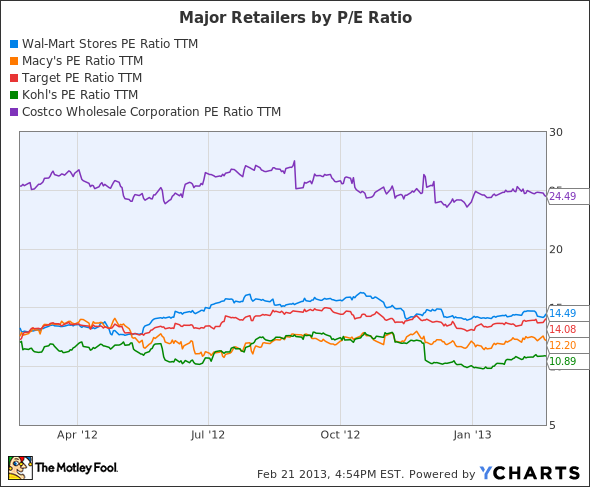