Mexico has many positives. Its citizens are growing with a per capita GDP growth rate stronger than America’s. The Mexican debt to GDP ratio of 42.87% is much less than that of Greece or Italy. A low debt to GDP ratio decreases the probability of a debt crisis.

The Mexican peso has gained strength relative to the U.S. dollar, showing that the market has confidence in the nation. Diversifying a portfolio with multiple countries is a good idea and there are quality companies that offer exposure to this growing nation. 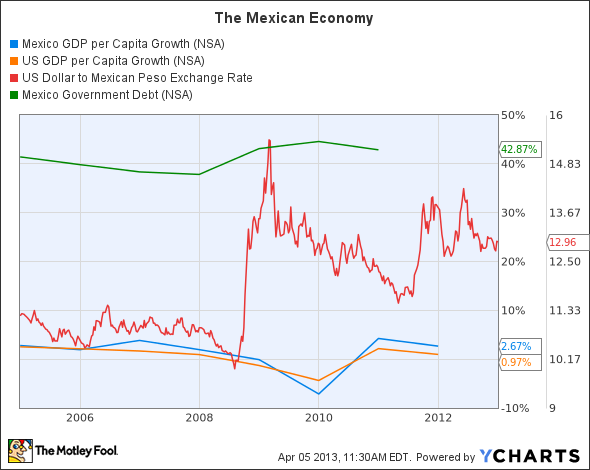 LATIN AMER EQUITY FUND (NYSEMKT:LAQ) is a small close-ended fund with a little more than $250 million of assets under management. Close-ended funds function like ETFs with one crucial difference; they can trade far away from their net asset value (NAV). This can be a great tool for investors as it allows them to buy stocks at a discount. This fund is one such story as it currently trades at a discount close to 10% of its NAV.

This fund is a general Latin American fund, but it has 18.9% of its assets in Mexican firms. Brazil has the majority of assets with 67% of holdings and Chile comes in third at 7.2% of assets. One downside is the fund’s relatively high expense ratio of 1.16%. Close-ended funds require some degree of attention because investors much watch the discount/premium and sell when the fund is at a substantial premium. For a more adventurous investor who is willing to play with alternative asset classes, this fund is worth a second look.

Wal-Mart Stores, Inc. (NYSE:WMT) is a massive company with 2,354 retail units in Mexico. From small coastal cities like Manzanillo to metropolitan centers like Guadalajara and Cuidad de México, Wal-Mart has expanded with vigor. Mexico plays an important part in the company with 21.8% of all worldwide stores.

Wal-Mart Stores, Inc. (NYSE:WMT) is a well-run company with a strong five year EPS growth of 10.25% and a strong five year dividend growth rate of 13.24%. The company has used international expansion to help drive growth and this year it will continue with 30 new stores in China. Its total debt to equity ratio of 0.71 is no cause for concern. Its bond issues are very popular with an AA credit rating. The company is a well-known U.S. retailer with stable earnings and it is also an easy way to invest Mexico.

Costco Wholesale Corporation (NASDAQ:COST) has carved out its niche among higher-end shoppers. As of December, 2012 it had 32 stores in Mexico. These stores are only 5.1% of the company’s total, but it shows that the company has more room to expand. The majority of stores are found in the middle of the country around the population centers of Guadalajara and Cuidad de México. The company will continue its expansion as it plans to open another Mexcan store this year.i

Family Dollar Stores Inc (FDO): Earnings, an Early LookWal-Mart Stores, Inc. (WMT): Will It Be the Death of Near Field Communications...