The world’s largest payments network, Visa Inc (NYSE:V) has done exceptionally well for its shareholders since its highly-publicized IPO in 2008, which at the time was the largest in history.  From the IPO price of $44 per share, the stock has risen pretty steadily to its current level around $160, a gain of almost 300% in just over 4 years.  I bought into the IPO and sold around $70 thinking I had made a brilliant move!  Oh well, live and learn.

Visa has proven itself to be a extremely shareholder-friendly company, with an excellent buyback program and a small, but consistently growing dividend yield.  However, after the remarkable run, investors have a tough decision: sell or hold?  With the company set to report earnings next Wednesday the 6th, investors want to know if the company has more growth or if it is slowing down.

Visa primarily earns its money from card service fees and other various processing fees.  In fiscal year 2012, the company processed 66 billion transactions worth a staggering $3.9 trillion; a growth of 7% from the year before.  In fact, over the past decade, Visa has grown its revenues tremendously (almost linearly), from less than $2 billion in 2003 to over $10 billion now. 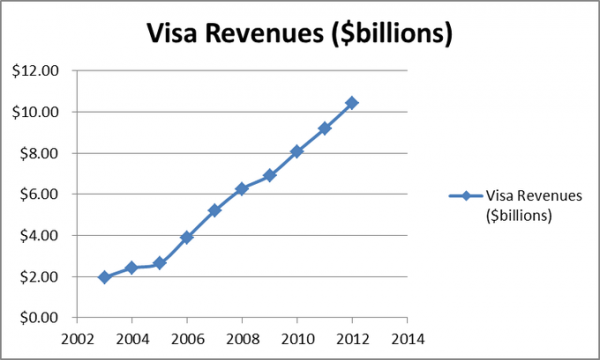 Visa has stated that they intend to grow their payment network even further, particularly by increasing the number of services offered in international markets.  The company also plans to extend the reach of its value-added services, such as risk management, loyalty services, dispute management, and others.

While I believe Visa’s legal issues are a thing of the past now, they are still worth mentioning since the outcomes of their lawsuits have affected the way they can do business.  During 2007 and 2008, Visa settled antitrust lawsuits with rivals American Express Company (NYSE:AXP) and Discover Financial Services (NYSE:DFS) for a total of approximately $3 billion.

As a result of the financial crisis, new regulations were signed into law governing debit card fees.  Merchants are now allowed to offer discounts to consumers who pay with cash and set credit card minimum purchase amounts.  It doesn’t appear that this has affected Visa’s bottom line in any measurable way, but it is still worth keeping an eye on.

Finally, just this past July, Visa, along with Mastercard Inc (NYSE:MA) settled a lingering 2005 lawsuit related to processing fees.  As a result of this settlement, Visa agreed to pay $4.4 billion and to allow retailers to impose a surcharge on credit card transactions.  The surcharge issue is worth keeping an eye on, and I would like to hear the company comment on this during the earnings call.

Given how quickly it is growing, Visa is one of the more attractive companies that I know of.  Currently trading at 22 times current year earnings, Visa is expected to earn $7.27, $8.41, and $9.84 per share for the next three fiscal years, for an average annual earnings growth rate of 16.7%.  Additionally, Visa has approximately $3 billion in cash and virtually no debt, also a strong positive.

Maybe There’s Something to This Research In Motion Limited (RIMM) Thing...
Monthly Newsletter Strategy
Download a free copy of our newsletter and see the details inside!
Hedge Fund Resource Center
Billionaire Hedge Funds