VeriFone Systems Inc (NYSE:PAY)  was down as much as 25% last week after the payment solutions company reported a fiscal 2Q net loss of $0.54 per share compared to income of $0.03 per share for the year-ago quarter. This isn’t VeriFone’s first fall off the wagon this year, and it might not be the last. It appears that VeriFone’s old school point-of-sale (POS) terminals are being left in the dust by the move to mobile payments.

Back in February, the company announced 1Q performance that resulted in a similar punishing of the stock, and after the recent pullback the stock is now down more than 40% year-to-date. 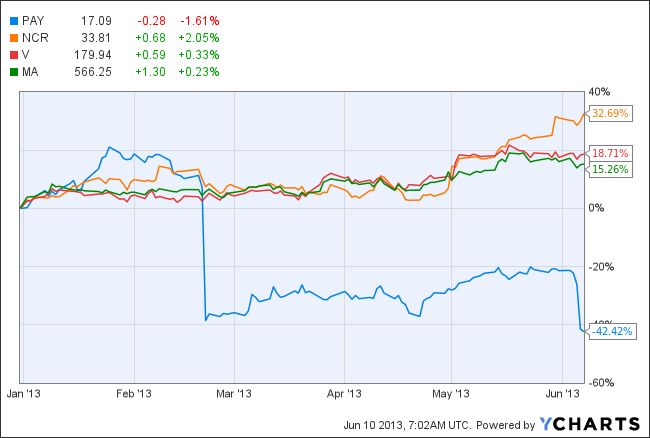 VeriFone Systems Inc (NYSE:PAY) provides solutions and services for the financial, retail, hospitality, petroleum, transportation, government, and healthcare markets. Its system solutions consist of POS electronic payment devices. Up until a couple of years ago, in just about every store, whether it be retail or a convenience store, the terminal used to swipe your credit card was probably from VeriFone; however, this isn’t the case anymore.

What the chart above really tells me is that the move to mobile payments is real. VeriFone is seeing competitive pressure for its POS systems from all sides, which includes evolving alternative and mobile payment methods being offered by Google Inc (NASDAQ:GOOG), eBay Inc (NASDAQ:EBAY)‘s PayPal, Groupon Inc (NASDAQ:GRPN), Isis, Visa Inc (NYSE:V), Mastercard Inc (NYSE:MA) and American Express Company (NYSE:AXP).

What’s more is that VeriFone Systems Inc (NYSE:PAY) decided to abandon its Square-like mobile payment device/system, noting that Sail never attracted big user numbers, which is why the product never made money. VeriFone now hopes to focus on providing mobile payments to small merchants via an indirect channel.

There are some positives for VeriFone, which include investing in the U.S. by acquiring a $5 million tablet-based software business, and the company has also invested significantly in taxi systems and media systems. The conventional POS system has yet to be heavily disrupted in the petroleum and tax business, where VeriFone Systems Inc (NYSE:PAY) is still performing strongly. But I believe it’s only a matter of time before innovation comes knocking on these industries’ door.

The move toward mobile payments appears to be real. Part of this is that people don’t like carrying wallets. In a Wakefield Research study, some 83% of respondents said they would ditch their wallets if possible.

PayPal has been a pioneer in this area and recently announced a “cash for registers” program that will allow businesses to trade in their registers for an iPad-based PayPal Here solution, allowing businesses to accept credit cards, debit cards, checks and PayPal payments. The system also uses a wireless network to connect to a cash drawer and printer.

MasterCard, meanwhile, has its MasterPass service, an app that will allow customers to pay for goods without approaching a cashier, but instead by scanning a bar code and creating a digital receipt on their phone as they exit the store. A roll-out in the U.S. expected in late spring.

A couple of participating retailers and airlines include Argos and AmericanAirlines. MasterCard is also looking to increase card and mobile payments in cash-dominated countries. MasterCard has a partnership with TIM, the second-largest mobile network operator in Brazil, for launching a mobile-money program for its subscribers.

These new initiatives are expected to help MasterCard meet the expected revenue growth of 10% in 2013 and 2014. As well, the payment-processing company has a strong balance sheet and with high profitability.

Visa plans on launching its own digital wallet service soon, V.me. While eBay Inc (NASDAQ:EBAY)’s PayPal recently launched a new European version of its mobile payments service that will run on iOS and Android.