Shares of Vera Bradley, Inc. (NASDAQ:VRA) were down some 13% last week despite the fact that the company’s earnings managed to beat consensus. The news driving the pressure on the stock is the departure of CEO Michael Ray. However, this huge sell-off by the market could be just an overreaction and provide investors with a great buying opportunity.

Since its 2010 IPO, Vera Bradley, Inc. (NASDAQ:VRA) has operated amidst a troubled economy, but with consumer confidence being near six-year highs and steady progress being made in the jobs market, this could lead to a rebound in discretionary spending by consumers–a big positive for Vera and just what the company needs to see a turnaround in the stock.

The other big drag on the stock is the downward revision of 2013 earnings expectations, with EPS now expected to come in between $1.74 to $1.78, down from the previous guidance of $1.83 to $1.88. The big drop is just another step in Vera’s gross under-performance of the apparel market since 2011. 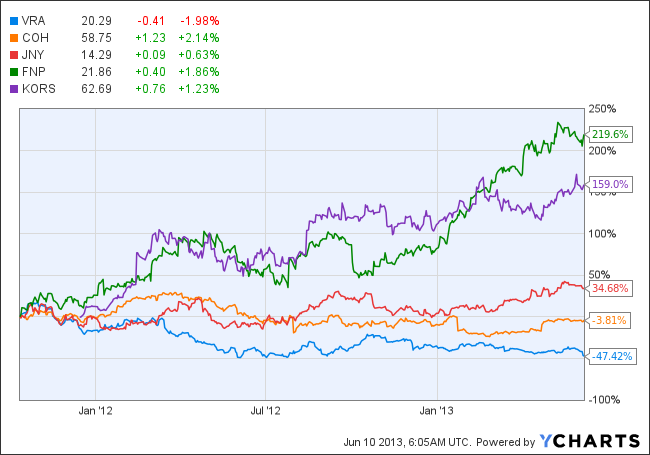 Part of these under-performance issues relate to the leadership changes. Not only is the CEO stepping down, but CFO Jeffrey Blade abruptly stepped down earlier this year. Blade’s exit is said to suggest problems amongst the executive and management teams. As well, the past few years have not been kind to companies that rely on discretionary dollars, thanks to high unemployment and a weak economy. However, the rebounding economy and higher consumer sentiment could spell good news for Vera and other higher-end retailers.

Specifically for Vera Bradley, Inc. (NASDAQ:VRA), the company is looking to expand its market share and grow sales via new store openings. The company opened some 20 stores last year and plans to open another 20-plus this year. This includes international expansion. Vera believes there lies a vast opportunity in Japan, where management believes Japanese consumers have similar customer characteristics as in the U.S. Vera’s deal to sell its products in Dillard’s, Inc. (NYSE:DDS)‘s stores also appears to be performing nicely.

How are other high-end comps doing?

Coach, Inc. (NYSE:COH) is the major retailer of men and women accessories. I see Coach as one of Vera’s chief competitors given both of their catering to the high-end accessories business. Worth noting is that Coach is looking to embrace the men’s market, when Vera still focuses exclusively on women’s.

Coach, Inc. (NYSE:COH)’s fiscal 3Q EPS came in at $0.84, compared to $0.77 for the same quarter last year, on the back of 7% higher sales. Following the earnings, Wells Fargo & Co (NYSE:WFC) reiterated its outperform rating on the stock with a $63 price target on the high end, citing comp sales growth of 1% in the quarter and gross margins being up 35 basis points, both beating Wells’ expectations.

Much like Vera Bradley, Inc. (NASDAQ:VRA)’s growth plans, Coach, Inc. (NYSE:COH) hopes to support sales growth via store openings, with plans to increase its retail square footage by 10% in fiscal 2013. However, while Vera is targeting Japan, Coach is looking to China. Coach, Inc. (NYSE:COH) is also leaning on its men’s accessories to add to revenue, where the retailer hopes to reach $600 million in sales from men’s accessories in 2013, up from $400 million in 2012.

Going into the first quarter, there were a total of 37 hedge funds long the stock, a 19% increase from the previous quarter. Ariel Investments has the the most valuable position among major funds, with a $39 million position (see Ariel’s top stocks).

One of the underrated apparel companies is The Jones Group Inc. (NYSE:JNY), which is a leading designer of women’s apparel, with brands that include Jones New York, Nine West and Rachel Roy.

The company posted 1Q EPS of $0.15 versus $0.31 for the same period last year, missing consensus of $0.12. Now the company is looking to focus on sportswear as one of its big initiatives to better resonate with customers. Other initiatives include the closure of under-performing retail stores, which should help the company save upwards of $11 million in fiscal 2014.