Is US Ecology Inc. (NASDAQ:ECOL) a bargain? Prominent investors are in a bearish mood. The number of bullish hedge fund positions were trimmed by 4 in recent months. Our calculations also showed that ECOL isn’t among the 30 most popular stocks among hedge funds (see the video below). ECOL was in 5 hedge funds’ portfolios at the end of the second quarter of 2019. There were 9 hedge funds in our database with ECOL positions at the end of the previous quarter.

In today’s marketplace there are a lot of methods stock traders employ to assess their stock investments. A pair of the best methods are hedge fund and insider trading signals. Our experts have shown that, historically, those who follow the best picks of the elite investment managers can outperform the market by a solid amount (see the details here).

Unlike former hedge manager, Dr. Steve Sjuggerud, who is convinced Dow will soar past 40000, our long-short investment strategy doesn’t rely on bull markets to deliver double digit returns. We only rely on hedge fund buy/sell signals. We’re going to take a gander at the new hedge fund action surrounding US Ecology Inc. (NASDAQ:ECOL).

How are hedge funds trading US Ecology Inc. (NASDAQ:ECOL)?

Heading into the third quarter of 2019, a total of 5 of the hedge funds tracked by Insider Monkey were long this stock, a change of -44% from the first quarter of 2019. On the other hand, there were a total of 8 hedge funds with a bullish position in ECOL a year ago. With hedge funds’ sentiment swirling, there exists an “upper tier” of notable hedge fund managers who were adding to their stakes substantially (or already accumulated large positions). 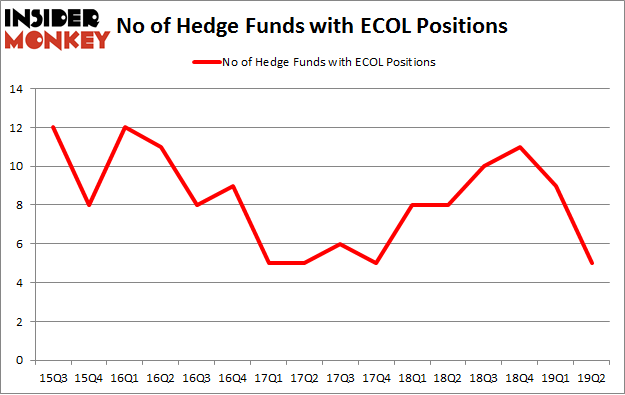 When looking at the institutional investors followed by Insider Monkey, Renaissance Technologies has the number one position in US Ecology Inc. (NASDAQ:ECOL), worth close to $3.8 million, comprising less than 0.1%% of its total 13F portfolio. The second most bullish fund manager is Millennium Management, led by Israel Englander, holding a $1 million position; the fund has less than 0.1%% of its 13F portfolio invested in the stock. Some other professional money managers that are bullish contain John Overdeck and David Siegel’s Two Sigma Advisors, Michael Gelband’s ExodusPoint Capital and Cliff Asness’s AQR Capital Management.

Since US Ecology Inc. (NASDAQ:ECOL) has faced a decline in interest from the entirety of the hedge funds we track, we can see that there were a few hedgies who were dropping their positions entirely by the end of the second quarter. At the top of the heap, Ken Griffin’s Citadel Investment Group cut the biggest position of all the hedgies watched by Insider Monkey, comprising about $1.9 million in stock, and Peter Rathjens, Bruce Clarke and John Campbell’s Arrowstreet Capital was right behind this move, as the fund cut about $1 million worth. These moves are interesting, as total hedge fund interest dropped by 4 funds by the end of the second quarter.

As you can see these stocks had an average of 13.75 hedge funds with bullish positions and the average amount invested in these stocks was $72 million. That figure was $7 million in ECOL’s case. AAR Corp. (NYSE:AIR) is the most popular stock in this table. On the other hand OneSmart International Education Group Limited (NYSE:ONE) is the least popular one with only 7 bullish hedge fund positions. Compared to these stocks US Ecology Inc. (NASDAQ:ECOL) is even less popular than ONE. Hedge funds clearly dropped the ball on ECOL as the stock delivered strong returns, though hedge funds’ consensus picks still generated respectable returns. Our calculations showed that top 20 most popular stocks among hedge funds returned 24.4% in 2019 through September 30th and outperformed the S&P 500 ETF (SPY) by 4 percentage points. A small number of hedge funds were also right about betting on ECOL as the stock returned 7.7% during the third quarter and outperformed the market by an even larger margin.