Investing in small cap stocks has historically been a way to outperform the market, as small cap companies typically grow faster on average than the blue chips. That outperformance comes with a price, however, as there are occasional periods of higher volatility. The one and a half month time period since the end of the third quarter is one of those periods, as the Russell 2000 ETF (IWM) has underperformed the larger S&P 500 ETF (SPY) by about 4 percentage points. Given that the funds we track tend to have a disproportionate amount of their portfolios in smaller cap stocks, they have seen some volatility in their portfolios too. Actually their moves are potentially one of the factors that contributed to this volatility. In this article, we use our extensive database of hedge fund holdings to find out what the smart money thinks of United States Steel Corporation (NYSE:X).

Is United States Steel Corporation (NYSE:X) a buy here? The smart money is buying. The number of long hedge fund bets went up by 2 recently. Our calculations also showed that X isn’t among the 30 most popular stocks among hedge funds. X was in 32 hedge funds’ portfolios at the end of September. There were 30 hedge funds in our database with X holdings at the end of the previous quarter.

Heading into the fourth quarter of 2018, a total of 32 of the hedge funds tracked by Insider Monkey were long this stock, a change of 7% from one quarter earlier. Below, you can check out the change in hedge fund sentiment towards X over the last 13 quarters. With hedge funds’ positions undergoing their usual ebb and flow, there exists a few key hedge fund managers who were adding to their holdings significantly (or already accumulated large positions). 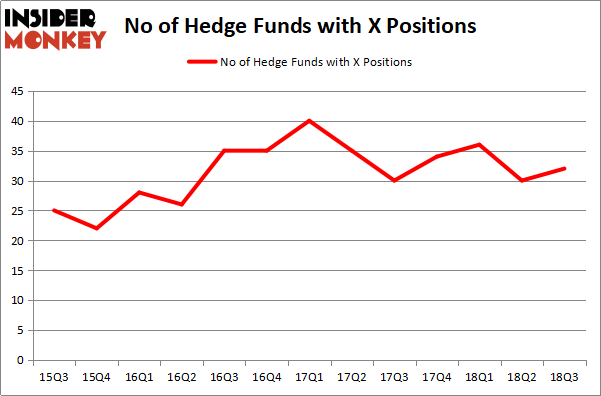 As industrywide interest jumped, some big names have been driving this bullishness. Marshall Wace LLP, managed by Paul Marshall and Ian Wace, created the biggest position in United States Steel Corporation (NYSE:X). Marshall Wace LLP had $10.4 million invested in the company at the end of the quarter. Deepak Gulati’s Argentiere Capital also made a $3.8 million investment in the stock during the quarter. The following funds were also among the new X investors: ZilvinasáMecelis’s Covalis Capital, Sara Nainzadeh’s Centenus Global Management, and Barry Rosenstein’s JANA Partners.

As you can see these stocks had an average of 15 hedge funds with bullish positions and the average amount invested in these stocks was $273 million. That figure was $636 million in X’s case. RenaissanceRe Holdings Ltd. (NYSE:RNR) is the most popular stock in this table. On the other hand Elbit Systems Ltd. (NASDAQ:ESLT) is the least popular one with only 2 bullish hedge fund positions. Compared to these stocks United States Steel Corporation (NYSE:X) is more popular among hedge funds. Considering that hedge funds are fond of this stock in relation to its market cap peers, it may be a good idea to analyze it in detail and potentially include it in your portfolio.