Most investors tend to think that hedge funds and other asset managers are worthless, as they cannot beat even simple index fund portfolios. In fact, most people expect hedge funds to compete with and outperform the bull market that we have witnessed in recent years. However, hedge funds are generally partially hedged and aim at delivering attractive risk-adjusted returns rather than following the ups and downs of equity markets hoping that they will outperform the broader market. Our research shows that certain hedge funds do have great stock picking skills (and we can identify these hedge funds in advance pretty accurately), so let’s take a glance at the smart money sentiment towards United Parcel Service, Inc. (NYSE:UPS).

United Parcel Service, Inc. (NYSE:UPS) has experienced a small decrease in hedge fund sentiment lately. Overall hedge fund sentiment towards the stock has been stuck in a tight range for years. Our calculations also showed that UPS isn’t among the 30 most popular stocks among hedge funds (see the video below).

Unlike some fund managers who are betting on Dow reaching 40000 in a year, our long-short investment strategy doesn’t rely on bull markets to deliver double digit returns. We only rely on hedge fund buy/sell signals. We’re going to review the latest hedge fund action regarding United Parcel Service, Inc. (NYSE:UPS).

How have hedgies been trading United Parcel Service, Inc. (NYSE:UPS)?

Heading into the third quarter of 2019, a total of 36 of the hedge funds tracked by Insider Monkey were long this stock, a change of -3% from the previous quarter. Below, you can check out the change in hedge fund sentiment towards UPS over the last 16 quarters. So, let’s find out which hedge funds were among the top holders of the stock and which hedge funds were making big moves. 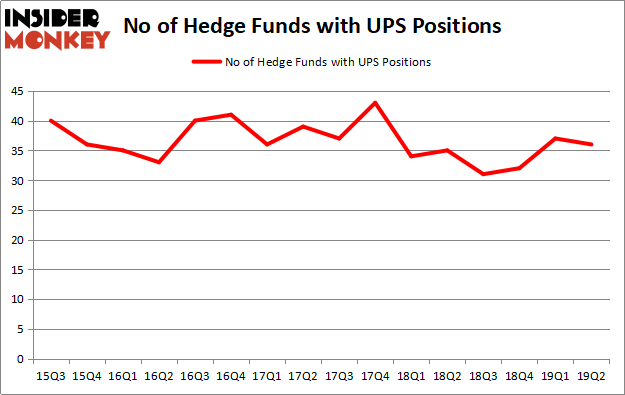 When looking at the institutional investors followed by Insider Monkey, Michael Larson’s Bill & Melinda Gates Foundation Trust has the most valuable position in United Parcel Service, Inc. (NYSE:UPS), worth close to $467.3 million, accounting for 2.4% of its total 13F portfolio. The second largest stake is held by Two Sigma Advisors, managed by John Overdeck and David Siegel, which holds a $207.3 million position; the fund has 0.5% of its 13F portfolio invested in the stock. Remaining members of the smart money that are bullish include Ken Griffin’s Citadel Investment Group, Steve Cohen’s Point72 Asset Management and Phill Gross and Robert Atchinson’s Adage Capital Management.

Judging by the fact that United Parcel Service, Inc. (NYSE:UPS) has experienced a decline in interest from the aggregate hedge fund industry, it’s easy to see that there lies a certain “tier” of money managers who sold off their entire stakes by the end of the second quarter. At the top of the heap, John Smith Clark’s Southpoint Capital Advisors dumped the biggest position of all the hedgies tracked by Insider Monkey, totaling close to $55.9 million in call options. Brandon Haley’s fund, Holocene Advisors, also dumped its call options, about $47.2 million worth. These bearish behaviors are interesting, as aggregate hedge fund interest was cut by 1 funds by the end of the second quarter.

As you can see these stocks had an average of 44.25 hedge funds with bullish positions and the average amount invested in these stocks was $4287 million. That figure was $1052 million in UPS’s case. Booking Holdings Inc. (NASDAQ:BKNG) is the most popular stock in this table. On the other hand British American Tobacco plc (NYSEAMEX:BTI) is the least popular one with only 9 bullish hedge fund positions. United Parcel Service, Inc. (NYSE:UPS) is not the least popular stock in this group but hedge fund interest is still below average. Our calculations showed that top 20 most popular stocks among hedge funds returned 24.4% in 2019 through September 30th and outperformed the S&P 500 ETF (SPY) by 4 percentage points. A small number of hedge funds were also right about betting on UPS as the stock returned 17% during the same time frame and outperformed the market by an even larger margin.