United Parcel Service, Inc. (NYSE:UPS) was in 31 hedge funds’ portfolios at the end of the third quarter of 2018. UPS investors should be aware of a decrease in enthusiasm from smart money lately. There were 35 hedge funds in our database with UPS positions at the end of the previous quarter. Our calculations also showed that UPS isn’t among the 30 most popular stocks among hedge funds.

To the average investor there are several signals investors have at their disposal to value publicly traded companies. Two of the less utilized signals are hedge fund and insider trading activity. Our researchers have shown that, historically, those who follow the top picks of the top hedge fund managers can beat the broader indices by a solid margin (see the details here).

At Q3’s end, a total of 31 of the hedge funds tracked by Insider Monkey were bullish on this stock, a change of -11% from the second quarter of 2018. On the other hand, there were a total of 43 hedge funds with a bullish position in UPS at the beginning of this year. With hedge funds’ positions undergoing their usual ebb and flow, there exists a select group of key hedge fund managers who were boosting their holdings considerably (or already accumulated large positions). 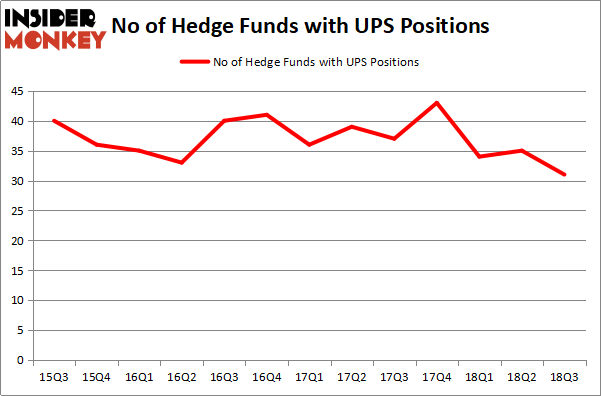 Among these funds, Eagle Capital Management held the most valuable stake in United Parcel Service, Inc. (NYSE:UPS), which was worth $588.2 million at the end of the third quarter. On the second spot was Bill & Melinda Gates Foundation Trust which amassed $528.3 million worth of shares. Moreover, Two Sigma Advisors, Southpoint Capital Advisors, and Citadel Investment Group were also bullish on United Parcel Service, Inc. (NYSE:UPS), allocating a large percentage of their portfolios to this stock.

Since United Parcel Service, Inc. (NYSE:UPS) has experienced falling interest from the entirety of the hedge funds we track, it’s easy to see that there lies a certain “tier” of hedge funds who were dropping their positions entirely in the third quarter. It’s worth mentioning that Steve Cohen’s Point72 Asset Management said goodbye to the biggest position of the 700 funds tracked by Insider Monkey, totaling close to $61.6 million in stock, and Dmitry Balyasny’s Balyasny Asset Management was right behind this move, as the fund dumped about $34 million worth. These transactions are interesting, as aggregate hedge fund interest fell by 4 funds in the third quarter.

As you can see these stocks had an average of 35.5 hedge funds with bullish positions and the average amount invested in these stocks was $1.94 billion. That figure was $1.91 billion in UPS’s case. Gilead Sciences, Inc. (NASDAQ:GILD) is the most popular stock in this table. On the other hand GlaxoSmithKline plc (NYSE:GSK) is the least popular one with only 24 bullish hedge fund positions. United Parcel Service, Inc. (NYSE:UPS) is not the least popular stock in this group but hedge fund interest is still below average. This is a slightly negative signal and we’d rather spend our time researching stocks that hedge funds are piling on. In this regard GILD might be a better candidate to consider a long position.

Here is What Hedge Funds Think About Nielsen Holdings plc (NLSN)
Monthly Newsletter Strategy
Download a free copy of our newsletter and see the details inside!
Hedge Fund Resource Center
Related News
5 Biggest Companies That Might Be Disrupted By Blockchain Technology Top 10 Logistics Companies In The World In 2017 11 Companies With The Most Employees In The US Bill Gates’ Portfolio: 5 Dividend Stocks Held By The World’s Richest Man 11 Companies With A Competitive Advantage For Long-Term Investors Markets Snapshot: 31 Major Stories Telling What’s Happening in the Finance World Today 10 Companies That Offer Health Insurance For Part Time Employees The 10 Best Islands to Visit in 2019 5 Most Socially Responsible Companies in America 5 Ways You Can Eliminate Credit Card Debt
Billionaire Hedge Funds