I recently did a study on the 30 Dow components, and 40% of those companies saw declining revenue in their latest fiscal year. The Dow has moved higher for various reasons, but that’s a story for another time. The point here is that while many Dow-component companies are suffering revenue declines, Under Armour Inc (NYSE:UA) is delivering consistent top-line gains. That’s impressive.

Additionally, Under Armour Inc (NYSE:UA) isn’t sitting back and relying on momentum alone. It’s also a consistent innovator, which keeps the pipeline busy and full of potential.

Part of Under Armour’s growth strategy is international expansion, but innovation is just as important because it heightens demand in established markets. A few of the company’s most recent innovations:

Nike’s flyknit running shoe Free Hyperfeel gets rid of extra padding, allowing the runner’s foot to feel the ground. Nike Pro Turbospeed is the lightest and fastest track uniform Nike has ever designed. It’s clearly evident that Under Armour and NIKE, Inc. (NYSE:NKE) are battling each other with similar products. Under Armour has more growth potential domestically, while Nike has more growth potential internationally, thanks to its immense marketing power.

Many investors who venture into the apparel space often find themselves also considering Lululemon Athletica inc. (NASDAQ:LULU) as an investment option. Here’s why: 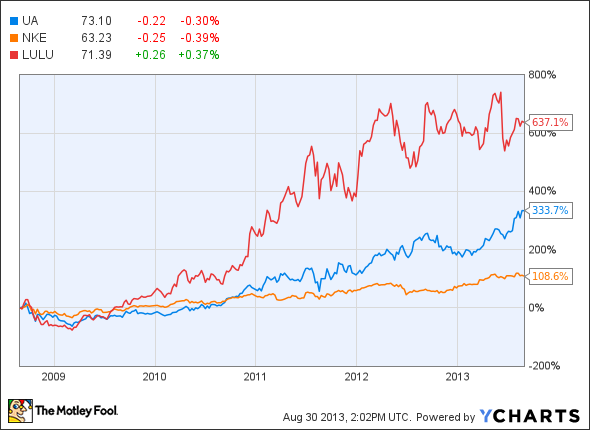