After the market closed on July 30, antibiotic expert Cubist Pharmaceuticals Inc (NASDAQ:CBST) announced two acquisitions worth up to a combined $1.6 billion. The acquisitions are exciting news for investors — companies don’t spend half of their market cap overnight very often — but why did Cubist make such a big push to infuse growth into its pipeline? It turns out the company is incredibly dependent on its main product, Cubicin (daptomycin), which accounted for 96% of sales in 2012 and 94% in the first half of this year. 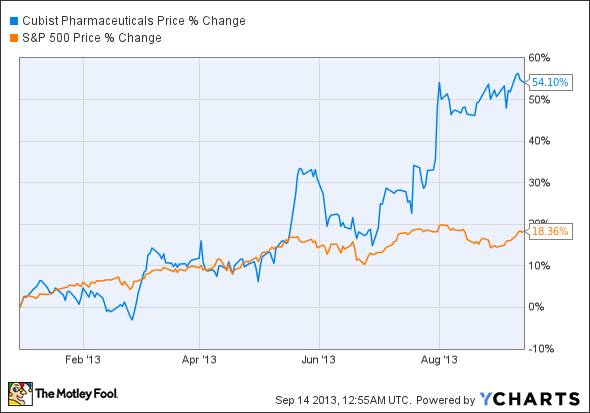 Let me be clear: Investors should applaud management for being proactive. However, playing devil’s advocate is often a productive experiment in investing and can force you to see things you may have overlooked otherwise. If you play along, you’ll be left with one burning question: Will new compounds from acquisitions be enough to relieve some pressure from its star compound?

A portfolio of potential?
The acquisition of Trius Therapeutics, Inc. (NASDAQ:TSRX) gives Cubist Pharmaceuticals Inc (NASDAQ:CBST) full rights to a late-stage antibiotic compound named TR-701 (tedizolid phosphate) that successfully completed two phase 3 trials. The next-generation drug will be used primarily in the treatment of skin infections, especially those caused by methicillin-resistant Staphylococcus aureus, or MRSA. It will compete directly with Zyvox (linezolid) from Pfizer Inc. (NYSE:PFE), which generated sales of $688 million in the first half of the year.

While Zyvox is successful, its growth rate has slowed to just 3% in the first six months of 2013. It competes with the drugs vancomycin and Cubicin, will face direct generic competition when it loses patent exclusivity in 2015, and will also be faced with competition from Cubist Pharmaceuticals Inc (NASDAQ:CBST)’s tedizolid when it launches in in mid- to late 2014 in the United States and about six months later in Europe. That is good news for tedizolid, which could gain significant market share if approved, although keep in mind that its success will occur at Cubicin’s expense for certain diseases.

Meanwhile, the acquisition of Optimer Pharmaceuticals, Inc. (NASDAQ:OPTR) gives Cubist Pharmaceuticals Inc (NASDAQ:CBST) full rights to Dificid, which was approved to treat Clostridium difficile-associated diarrhea in 2011. It may not sound familiar or common, but the pathogen is the leading cause of health care-acquired infections in hospitals — surpassing even the mighty and oft-quoted MRSA. Hopes for Dificid are much less enthusiastic than those for tedizolid. In a best-case scenario fellow Fool Sean Williams thinks the drug will bring in about $200 million to $225 million per year, or about what Cubicin rakes in in a single quarter. I tend to agree, especially since it generated sales of just $62 million in 2012 and $46.8 million in the first half of this year.

Cubicin stares down generics
Success for Dificid and tedizolid will be absolutely necessary if Cubist Pharmaceuticals Inc (NASDAQ:CBST) is going to survive the eventual fall of Cubicin. Hospira, Inc. (NYSE:HSP) and Teva Pharmaceutical Industries Ltd (ADR) (NYSE:TEVA) are already lining up to offer generic versions of the drug, which could hit the market as soon as 2017 or by mid-2018 depending on its pediatric exclusivity status. Both drug manufacturers have met Cubist Pharmaceuticals Inc (NASDAQ:CBST) in court — a common practice in the rite of passage for generic pharmaceutical approvals — and both figure to be major forces in Cubicin’s fall. Specifically, Hospira is attempting to first sell 350 mg doses of daptomycin, while Teva is looking to offer a 500 mg dose for its first product. Each regimen is covered by a separate patent, so each represents a domino that will eventually fall for Cubicin.

It is important to keep in mind that sales and market share of antibiotics are often hit particularly hard when generics step in. Additionally, manufacturers are always left with the risk of microbes becoming resistant to treatment, which has already driven market share away from vancomycin and toward Zyvox and Cubicin. It is a tough market to exceed in, although Cubist Pharmaceuticals Inc (NASDAQ:CBST) has done a remarkable job.