The U.S. energy market is going through a classic boom. High prices have inspired new production, while at the same time decreasing consumption.

No investment is guaranteed, but a good understanding of the macroeconomic situation can help to decrease risk. By investing in energy firms with interests outside of North America, you can benefit from stronger consumer demand. 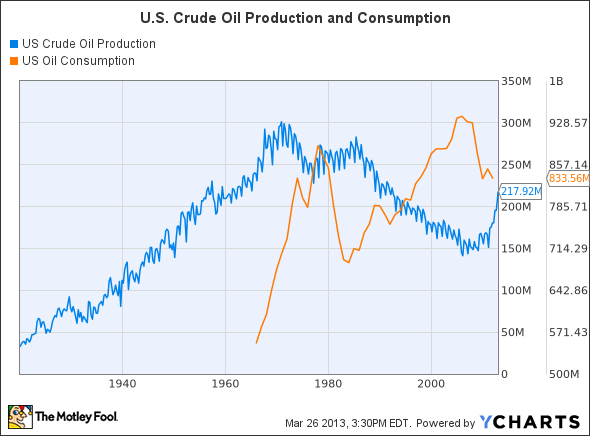 Transocean LTD (NYSE:RIG) rents out drill ships to upstream firms at a fixed rate, so that those companies can explore and develop their undersea assets. With ships in the UK’s North Sea, the waters off Angola and Brazil, and in the Gulf of Mexico, the company has its assets strewn throughout the world.

Currently there is a large amount of conflict between Carl Icahn and the board. Activist investors are known for their short-term thinking, and Transocean is fighting Icahn’s calls for a larger dividend.

The company has lost money for the past two years, which helps to explain why it’s trading at a low forward P/E ratio of 11.1. Transocean LTD (NYSE:RIG) is expected to be profitable in 2013 with an estimated earnings per share (EPS) of $4.69. Icahn’s desired dividend of $4.00 would eat up a large portion of earnings, so investors need to watch the firm to make sure it doesn’t sacrifice its precious cash for short term thinking.

Drilling for oil is not a simple process, and deep-water discoveries in Brazil highlight the strategic opportunity for companies like Halliburton Company (NYSE:HAL). This company provides a number of drilling services, and it’s trying to develop strategic advantages by developing new technologies for older wells. A large portion of the oil in any given formation is left in the ground, so slight improvements in a company’s ability to recover that oil can have a major impact on revenue.

In 2012, 54% of the firm’s revenue comes from outside of North America. Its international revenue growth is also strong. It has already been announced that they will continue to invest in Malaysia.

The company is profitable, with an EBIT margin of 14.5% and a profit margin of 9.3%. It is encouraging to see these numbers as America’s natural gas glut has caused companies to cut back their demand for Halliburton Company (NYSE:HAL)’s drilling services. The company’s total debt-to-equity ratio of 0.31 shows that that the company is not crippled by debt.

We may use your email to send marketing emails about our services. Click here to read our privacy policy.
Related Insider Monkey Articles
American Express Company (AXP), Bank of America Corp (BAC): Everything Seems...

Transocean LTD (RIG): Is it Worth Piggybacking the Iconic Carl Icahn?ConocoPhillips (COP), Continental Resources, Inc. (CLR): Do We Still Need the...