The proposed Keystone XL pipeline is very controversial. The oil industry supports the project as an effective way to deal with midstream constraints within the North American crude market. Environmentalists dislike Alberta’s heavy crude and they criticize Keystone XL because it will bring heavy crude to U.S. refineries. The controversy surrounding Keystone XL’s required presidential approval makes investing in the pipeline very volatile, even if it is likely to be approved.

The report also mentions that “costs for transporting WCSB (Western Canadian Sedimentary Basin crude) to major markets in northeast Asia (China, Japan, South Korea, Taiwan) via pipeline and tanker are lower than to transport the same crudes via pipeline to the U.S. Gulf Coast”. This is a negative for Keystone XL’s parent company, TransCanada Corporation (USA) (NYSE:TRP).

In the case that Keystone XL is not approved, TransCanada has some other crude pipelines on the drawing board. The downside is that these pipelines wouldn’t let TransCanada become the energy gateway to the west. These pipelines head eastward toward Montreal, away from the Asian markets.

Enbridge Inc (USA) (NYSE:ENB) is the company that has jumped the gun on Canadian crude oil pipelines that head west. The proposed Northern Gateway Pipeline would bring 525,000 barrels of oil per day (kbd) from Alberta to an export facility in Kitimat, BC. It would also bring 193 kbd of condensate from the coast to Alberta. A related project has been proposed to put a refinery in Kitimat so that Canada could sell refined crude from Enbridge Inc (USA) (NYSE:ENB)’s proposed pipeline. China has already said it would put up a large portion of the necessary capital for the refinery.

How do These Firms Compare as Investments? 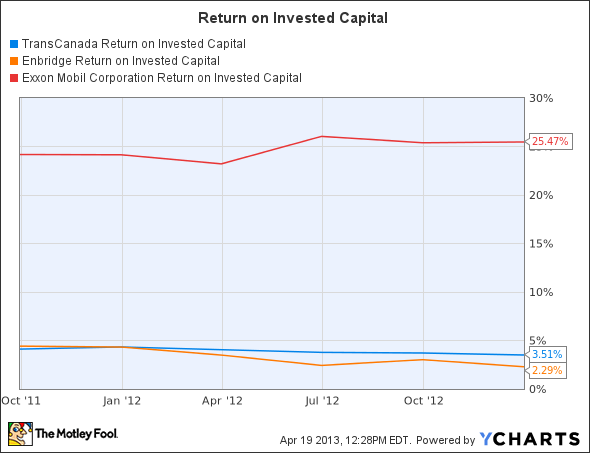 TransCanada Corporation (USA) (NYSE:TRP) is a diversified company with a number of natural gas pipelines, oil pipelines, and electrical power plants. The firm has $19.1 billion in long-term debt and a total debt to equity ratio of 1.27. The company is also looking at building a natural gas pipeline to Canada’s west coast for liquefied natural gas (LNG) exports to Asia.

With an expected 2014 earnings per share (EPS) of $2.51, the firm trades at a forward price to earnings ratio (P/E) around 19. This is rather expensive and shows that the market expects Keystone XL to be approved. The company is in a good industry with huge capital requirements that form strong barriers to entry. Its profit margin of 17.8% is also encouraging.