As we already know from media reports and hedge fund investor letters, hedge funds delivered their best returns in a decade. Most investors who decided to stick with hedge funds after a rough 2018 recouped their losses by the end of the second quarter. We get to see hedge funds’ thoughts towards the market and individual stocks by aggregating their quarterly portfolio movements and reading their investor letters. In this article, we will particularly take a look at what hedge funds think about Thor Industries, Inc. (NYSE:THO).

Is Thor Industries, Inc. (NYSE:THO) a buy right now? Prominent investors are in a bearish mood. The number of bullish hedge fund bets shrunk by 1 in recent months. Our calculations also showed that THO isn’t among the 30 most popular stocks among hedge funds (see the video below). 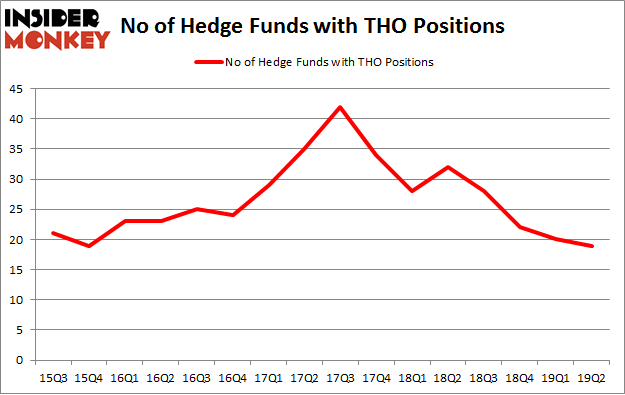 Among these funds, Renaissance Technologies held the most valuable stake in Thor Industries, Inc. (NYSE:THO), which was worth $24.1 million at the end of the second quarter. On the second spot was Ancient Art (Teton Capital) which amassed $19.4 million worth of shares. Moreover, Citadel Investment Group, Royce & Associates, and Millennium Management were also bullish on Thor Industries, Inc. (NYSE:THO), allocating a large percentage of their portfolios to this stock.

Because Thor Industries, Inc. (NYSE:THO) has faced falling interest from the entirety of the hedge funds we track, it’s easy to see that there was a specific group of hedge funds who sold off their positions entirely by the end of the second quarter. Intriguingly, Clint Carlson’s Carlson Capital dumped the biggest stake of the “upper crust” of funds followed by Insider Monkey, worth an estimated $17.5 million in stock, and Doug Gordon, Jon Hilsabeck and Don Jabro’s Shellback Capital was right behind this move, as the fund sold off about $2.8 million worth. These moves are interesting, as total hedge fund interest fell by 1 funds by the end of the second quarter.

As you can see these stocks had an average of 17.25 hedge funds with bullish positions and the average amount invested in these stocks was $266 million. That figure was $116 million in THO’s case. ASGN Incorporated (NYSE:ASGN) is the most popular stock in this table. On the other hand South Jersey Industries Inc (NYSE:SJI) is the least popular one with only 13 bullish hedge fund positions. Thor Industries, Inc. (NYSE:THO) is not the most popular stock in this group but hedge fund interest is still above average. This is a slightly positive signal but we’d rather spend our time researching stocks that hedge funds are piling on. Our calculations showed that top 20 most popular stocks among hedge funds returned 24.4% in 2019 through September 30th and outperformed the S&P 500 ETF (SPY) by 4 percentage points. Unfortunately THO wasn’t nearly as popular as these 20 stocks and hedge funds that were betting on THO were disappointed as the stock returned -3.1% during the third quarter and underperformed the market. If you are interested in investing in large cap stocks with huge upside potential, you should check out the top 20 most popular stocks among hedge funds as many of these stocks already outperformed the market so far this year.