Is O’Reilly Automotive Inc (NASDAQ:ORLY) a good equity to bet on right now? We like to check what the smart money thinks first before doing extensive research on a given stock. Although there have been several high profile failed hedge fund picks, the consensus picks among hedge fund investors have historically outperformed the market after adjusting for known risk attributes. It’s not surprising given that hedge funds have access to better information and more resources to predict the winners in the stock market.

Is O’Reilly Automotive Inc (NASDAQ:ORLY) an exceptional investment now? The best stock pickers are turning less bullish. The number of long hedge fund bets were trimmed by 8 recently. Our calculations also showed that ORLY isn’t among the 30 most popular stocks among hedge funds.

In the financial world there are dozens of signals market participants use to grade their stock investments. Two of the most useful signals are hedge fund and insider trading activity. Our researchers have shown that, historically, those who follow the best picks of the elite fund managers can outpace the broader indices by a significant amount (see the details here).

Unlike the largest US hedge funds that are convinced Dow will soar past 40,000 or the world’s most bearish hedge fund that’s more convinced than ever that a crash is coming, our long-short investment strategy doesn’t rely on bull or bear markets to deliver double digit returns. We only rely on the best performing hedge funds‘ buy/sell signals. Let’s review the key hedge fund action surrounding O’Reilly Automotive Inc (NASDAQ:ORLY).

What does smart money think about O’Reilly Automotive Inc (NASDAQ:ORLY)?

Heading into the fourth quarter of 2019, a total of 42 of the hedge funds tracked by Insider Monkey held long positions in this stock, a change of -16% from one quarter earlier. The graph below displays the number of hedge funds with bullish position in ORLY over the last 17 quarters. So, let’s examine which hedge funds were among the top holders of the stock and which hedge funds were making big moves. 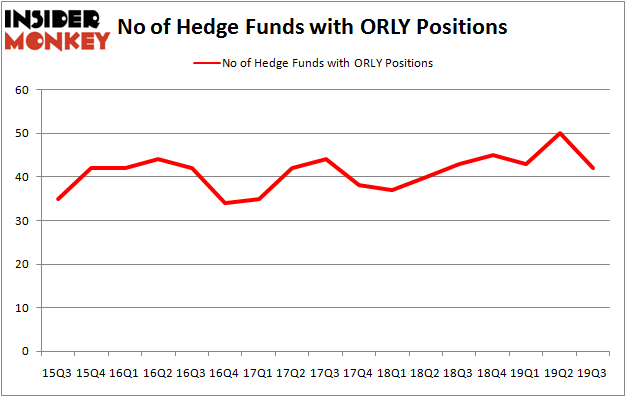 Because O’Reilly Automotive Inc (NASDAQ:ORLY) has witnessed bearish sentiment from hedge fund managers, it’s safe to say that there was a specific group of funds who sold off their full holdings by the end of the third quarter. Intriguingly, John Overdeck and David Siegel’s Two Sigma Advisors said goodbye to the largest stake of all the hedgies watched by Insider Monkey, totaling an estimated $69.3 million in stock. Greg Poole’s fund, Echo Street Capital Management, also cut its stock, about $33.3 million worth. These moves are important to note, as aggregate hedge fund interest fell by 8 funds by the end of the third quarter.

As you can see these stocks had an average of 40.25 hedge funds with bullish positions and the average amount invested in these stocks was $1743 million. That figure was $2055 million in ORLY’s case. NXP Semiconductors NV (NASDAQ:NXPI) is the most popular stock in this table. On the other hand ONEOK, Inc. (NYSE:OKE) is the least popular one with only 23 bullish hedge fund positions. O’Reilly Automotive Inc (NASDAQ:ORLY) is not the most popular stock in this group but hedge fund interest is still above average. Our calculations showed that top 20 most popular stocks among hedge funds returned 34.7% in 2019 through November 22nd and outperformed the S&P 500 ETF (SPY) by 8.5 percentage points. Hedge funds were also right about betting on ORLY as the stock returned 10% during the fourth quarter (through 11/22) and outperformed the market. Hedge funds were rewarded for their relative bullishness.