Most investors tend to think that hedge funds and other asset managers are worthless, as they cannot beat even simple index fund portfolios. In fact, most people expect hedge funds to compete with and outperform the bull market that we have witnessed in recent years. However, hedge funds are generally partially hedged and aim at delivering attractive risk-adjusted returns rather than following the ups and downs of equity markets hoping that they will outperform the broader market. Our research shows that certain hedge funds do have great stock picking skills (and we can identify these hedge funds in advance pretty accurately), so let’s take a glance at the smart money sentiment towards Antero Resources Corporation (NYSE:AR).

Antero Resources Corporation (NYSE:AR) investors should pay attention to an increase in enthusiasm from smart money in recent months. AR was in 30 hedge funds’ portfolios at the end of the second quarter of 2019. There were 27 hedge funds in our database with AR positions at the end of the previous quarter. Our calculations also showed that AR isn’t among the 30 most popular stocks among hedge funds (see the video below).

At Q2’s end, a total of 30 of the hedge funds tracked by Insider Monkey held long positions in this stock, a change of 11% from the previous quarter. By comparison, 16 hedge funds held shares or bullish call options in AR a year ago. With hedgies’ sentiment swirling, there exists an “upper tier” of noteworthy hedge fund managers who were boosting their holdings significantly (or already accumulated large positions). 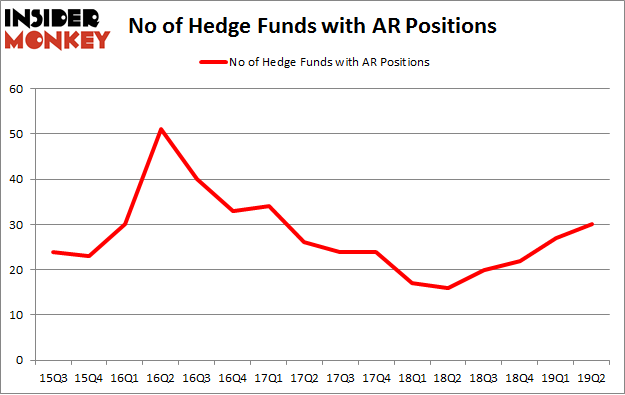 Of the funds tracked by Insider Monkey, FPR Partners, managed by Bob Peck and Andy Raab, holds the biggest position in Antero Resources Corporation (NYSE:AR). FPR Partners has a $170.1 million position in the stock, comprising 4.1% of its 13F portfolio. Coming in second is Baupost Group, led by Seth Klarman, holding a $158.1 million position; 1.4% of its 13F portfolio is allocated to the stock. Remaining peers that are bullish comprise MacKenzie B. Davis and Kenneth L. Settles Jr’s SailingStone Capital Partners, Glenn Greenberg’s Brave Warrior Capital and Israel Englander’s Millennium Management.

Consequently, some big names were leading the bulls’ herd. Encompass Capital Advisors, managed by Todd J. Kantor, established the most valuable position in Antero Resources Corporation (NYSE:AR). Encompass Capital Advisors had $17 million invested in the company at the end of the quarter. Joel Greenblatt’s Gotham Asset Management also made a $6 million investment in the stock during the quarter. The other funds with brand new AR positions are Matt Smith’s Deep Basin Capital, Mike Vranos’s Ellington, and John R. Wagner’s SCW Capital Management.