Is Tesla, Inc. (NASDAQ:TSLA) a good investment right now? We check hedge fund and billionaire investor sentiment before delving into hours of research. Hedge funds spend millions of dollars on Ivy League graduates, expert networks, and get tips from industry insiders. They sometimes fail miserably but historically their consensus stock picks outperformed the market after adjusting for known risk factors.

Tesla, Inc. (NASDAQ:TSLA) was in 31 hedge funds’ portfolios at the end of the third quarter of 2018. TSLA has experienced an increase in activity from the world’s largest hedge funds lately. There were 19 hedge funds in our database with TSLA positions at the end of the previous quarter. Among those 31 hedge funds bullish on the stock there weren’t many billionaires, and if you are interested to find out which companies billionaires have been piling on, check out the list of 30 stocks billionaires are crazy about: Insider Monkey billionaire stock index. Even though Tesla, Inc. (NASDAQ:TSLA) hasn’t attracted many of the wealthiest hedge fund managers, we’ll analyze it further to see if its worth buying.

According to most traders, hedge funds are perceived as unimportant, outdated financial vehicles of the past. While there are more than 8000 funds in operation today, Our researchers choose to focus on the aristocrats of this group, around 700 funds. These investment experts have their hands on most of the hedge fund industry’s total capital, and by observing their matchless stock picks, Insider Monkey has discovered a few investment strategies that have historically defeated Mr. Market. Insider Monkey’s flagship hedge fund strategy defeated the S&P 500 index by 6 percentage points annually since its inception in May 2014 through early November 2018. We were able to generate large returns even by identifying short candidates. Our portfolio of short stocks lost 26.1% since February 2017 even though the market was up nearly 19% during the same period. We just shared a list of 11 short targets in our latest quarterly update.

In order to make a complete analysis of the stock, we took into consideration what SoMa Equity Partners founder Gil Simon thinks about it, as he discussed it in a recent CNBC interview. The fund sold its entire position in the company during the third quarter, thinking it is a very difficult stock to hold because people are “really shooting at the company.” He further said: “So, we would like to be investors but maybe waiting for things to be a little more stable at the company before really making an investment again.“

At Q3’s end, a total of 31 of the hedge funds tracked by Insider Monkey held long positions in this stock, a change of 63% from the second quarter of 2018. Below, you can check out the change in hedge fund sentiment towards TSLA over the last 13 quarters. So, let’s see which hedge funds were among the top holders of the stock and which hedge funds were making big moves. 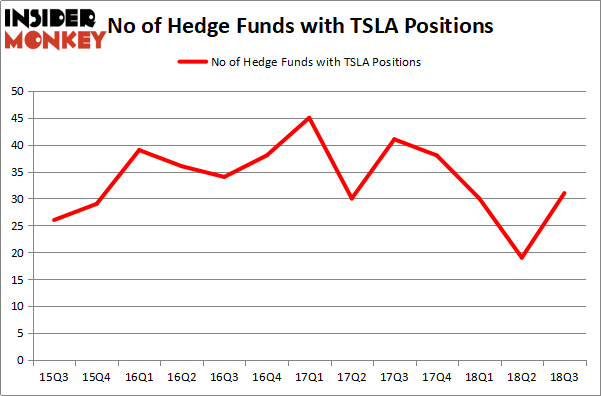 Among these funds, Citadel Investment Group held the most valuable stake in Tesla, Inc. (NASDAQ:TSLA), which was worth $1526 million at the end of the third quarter. On the second spot was PEAK6 Capital Management which amassed $202.4 million worth of shares. Moreover, D E Shaw, Masters Capital Management, and OZ Management were also bullish on Tesla, Inc. (NASDAQ:TSLA), allocating a large percentage of their portfolios to this stock.

As one would reasonably expect, some big names were leading the bulls’ herd. OZ Management, managed by Daniel S. Och, established the biggest position in Tesla, Inc. (NASDAQ:TSLA). OZ Management had $84.2 million invested in the company at the end of the quarter. Matthew Hulsizer’s PEAK6 Capital Management also initiated a $23.1 million position during the quarter. The other funds with new positions in the stock are Gilchrist Berg’s Water Street Capital, David Costen Haley’s HBK Investments, and Joe DiMenna’s ZWEIG DIMENNA PARTNERS.

As you can see these stocks had an average of 22 hedge funds with bullish positions and the average amount invested in these stocks was $913 million. That figure was $374 million in TSLA’s case. Cognizant Technology Solutions Corporation (NASDAQ:CTSH) is the most popular stock in this table. On the other hand Mizuho Financial Group, Inc. (NYSE:MFG) is the least popular one with only 3 bullish hedge fund positions. Tesla, Inc. (NASDAQ:TSLA) is not the most popular stock in this group but hedge fund interest is still above average. This is a slightly positive signal but we’d rather spend our time researching stocks that hedge funds are piling on. In this regard CTSH might be a better candidate to consider a long position.