If you had the wisdom to lock in profits in your portfolio in October 2007, then you are one of the lucky few. The market started to weaken soon after that and went on into a very deep funk during the following 18 months. For those who rode out the storm, the Dow Jones Industrial Average and the S&P 500 have only recently clawed back to break-even. In effect, investors have spun their wheels for five years.

But it could have been worse. Some stocks still haven’t climbed all the way back and still trade far below that October 2007 high watermark. This doesn’t mean they are bad companies, they’ve simply stayed largely out of favor — at least relative to the rest of the market. In fact, there are some very good companies among the group of five-year laggards. They have been able to boast higher sales and profits since then, and look well-positioned for the eventual and inevitable economic rebound.

Three stocks in particular, which have fallen by 40% or more during the past five years — compared to the market’s break-even performance — could post outsized returns in the next few years as their stars start to re-align. At a minimum, their multi-year stretch of underperformance has given them a solid value sheen, which could help provide downside support if the major market averages weaken from here.

1. Baker Hughes Incorporated (NYSE:BHI)
A half decade ago, firm oil and gas prices provided ample cash flow to invest in energy fields, which was leading to record sales for the industry’s top service providers. Since then, we’ve seen a precipitous plunge in gas prices, which led investors to flee these stocks. Shares of Schlumberger Limited. (NYSE:SLB), the industry’s top player, are down roughly 20% since late 2007, but Baker Hughes, a smaller rival, is off by a whopping 50%.

Yet appearances are deceiving. Baker Hughes has still managed to deliver solid growth, with sales doubling from $10.4 billion in 2007 to nearly $20 billion last year. Still, the company has had to fight hard to win contracts, sacrificing margins in the process, so operating income only grew around 10% from five years earlier, to a recent $2.56 billion.

Analysts increasingly expect a turn in 2013. The recent spike in natural gas prices has led to a rising number request for quotes (RFQ) for the company, while backlog is expected to start rising this winter. Though 2012 earnings are likely to fall around 25% to $3.30 per share, analysts see earnings rising back to $4 a share in 2013 and $5 in 2014.

2. Corning Incorporated (NYSE:GLW)
Five years ago, consumers were scrambling to buy the latest big screen TVs. Yet the Great Recessionled to a big slump, greatly affecting the sales and profit margins of top LCD and plasma glass producers such as Corning. Shares now trade for less than half the levels seen five years ago. 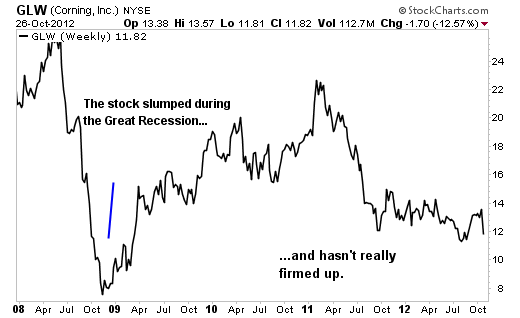 The good news: Some rivals have had to close plants, so industry capacity is now lower, which should spell the end of price wars. Indeed Corning recently announced two big contract wins with TV makers. This should help the company to firm up profit margins in this division as more factory overhead is absorbed.

Yet for some investors, the main reason to spot a rebound for Corning is its “Gorilla Glass,” which is becoming increasingly popular among smart phone and tablet computer makers that appreciate this material’s thin form feature. On a recent call with analysts, Corning noted that 33 electronics companies are using the technology, adding up to roughly 900 design wins and more than 1 billion devices.

Corning’s per-share earnings are likely to dip nearly 30% this year to around $1.30, thanks to pricing declines in LCD glass that have now been absorbed. Yet with pricing in that segment now stabilized, and with the Gorilla Glass segment showing solid momentum, earnings per share should move up toward the $1.50 mark in 2013 and 2014, according to Goldman Sachs analysts, who anticipate shares will likely rebound to $16.

3. Johnson Controls, Inc. (NYSE:JCI)
This diversified industrial firm has seen its stock fall by 40% during the past five years, thanks in part to tepid growth: Sales have grown from $34.6 billion in fiscal (September) 2007 to a likely $42.4 billion in fiscal 2012. This works out to about 5% annually. Analysts expect a similar growth rate for the 2013 fiscal year that began in early October.

Yet this is known as a “late-cycle” industrial play, as its various divisions tend to see a pickup in orders when the economy appears to be on firmer footing. For example, JCI is a leading provider of heating, cooling and ventilation equipment, and typically sees rising orders when the housing market is stronger.

Even as a firming economy might set the stage for double-digit sales growth as we head toward the mid-decade, management isn’t sitting by idly. Instead, it has laid out restructuring plans that should help boost the bottom line much sooner. As a result, operating profits are expected to rise by $500 million in fiscal 2013 (to about $2.7 billion), enabling earnings to rise about 15% to $2.90 per share, which would represent a company record.

Risks to Consider: These stocks are out of favor because they are experiencing the bottom of the cycles in their markets, and those cycles may not turn up quickly.

Action to Take –> It’s impossible to know the perfect time to buy cyclical stocks. Investors will flock to them the moment that the economy or their specific industry cycle is about to turn up. Yet after falling 40% or more from their last cyclical peak, it’s clear these three stocks are unloved and undervalued in the context of the eventual turn in the cycle.

Find Shelter From The Fiscal Cliff With These ETFs

Is the Market Sitting on a “Margin Bubble?”
Monthly Newsletter Strategy
Download a free copy of our newsletter and see the details inside!
Hedge Fund Resource Center
Billionaire Hedge Funds