We at Insider Monkey have gone over 700 13F filings that hedge funds and prominent investors are required to file by the SEC The 13F filings show the funds’ and investors’ portfolio positions as of September 30th. In this article, we look at what those funds think of The Walt Disney Company (NYSE:DIS) and Netflix, Inc. (NASDAQ:NFLX) based on that data.

Is The Walt Disney Company (NYSE:DIS) a buy, sell, or hold? Money managers are in a bullish mood. The number of bullish hedge fund positions improved by 11 lately, though our calculations showed that Disney still wasn’t among the 30 most popular stocks among hedge funds. However, it was more popular among billionaire investors, which are pretty much the cream of the crop of the investing world, as it landed 24th on the list of 30 Stocks Billionaires Are Crazy About: Insider Monkey Billionaire Stock Index. 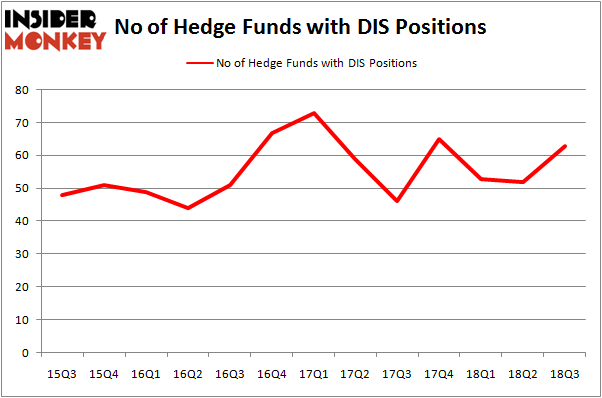 Among these funds, Viking Global held the most valuable stake in The Walt Disney Company (NYSE:DIS), which was worth $1271 million at the end of the third quarter. On the second spot was SRS Investment Management which amassed $890.3 million worth of shares. Moreover, Maverick Capital, Adage Capital Management, and Diamond Hill Capital were also bullish on The Walt Disney Company (NYSE:DIS), allocating a large percentage of their portfolios to this stock.

As you can see these stocks had an average of 43 hedge funds with bullish positions and the average amount invested in these stocks was $3.90 billion. That figure was $4.91 billion in DIS’s case. Netflix, Inc. (NASDAQ:NFLX) is the most popular stock in this table. On the other hand TOTAL S.A. (NYSE:TOT) is the least popular one with only 13 bullish hedge fund positions. The Walt Disney Company (NYSE:DIS) is not the most popular stock in this group but hedge fund interest is still above average. This is a slightly positive signal but we’d rather spend our time researching stocks that hedge funds are piling on. In this regard NFLX, which is in the process of disrupting Disney’s business model, might be a better candidate to consider a long position in.