The Southern Company (SO), PPL Corporation (PPL): This Week in Utilities, Biomass Buys and LNG Exports

Utilities (and their dividends) have been busy this week, making moves to maximize profit potential. From biomass buys to LNG exports, here’s what you need to know to stay on top of your dividend stocks’ latest moves.

Biomass master
The Southern Company (NYSE:SO) has been busy stocking up on renewables over the past couple of months, and this week is no exception. The company announced Tuesday that its Georgia Power subsidiary has signed a 20-year purchase power agreement to add 53 MW of biomass to its generation portfolio.

The electricity will be sourced from Rollcast Energy’s new Barnesville, Ga., plant and is expected to pack enough punch to power around 35,000 homes. Rollcast is not a publicly traded company itself, but Atlantic Power Corp (NYSE:AT) acquired a 60% equity interest in the biomass company in 2009.

PPL pats itself on the back
PPL Corporation (NYSE:PPL) hosted its annual meeting this Wednesday, celebrating its stock market success and strategic improvements over the past year. Chairman, President, and CEO William Spence noted that a recent rise in share price and 40% growth in market cap has made PPL “one of the 10 largest companies in the U.S. utility sector.”

PPL Corporation (NYSE:PPL)’s soaring shares are hardly unique among utilities, but its returns have beaten the Dow Jones U.S. Utilities Index by more than 7 percentage points. 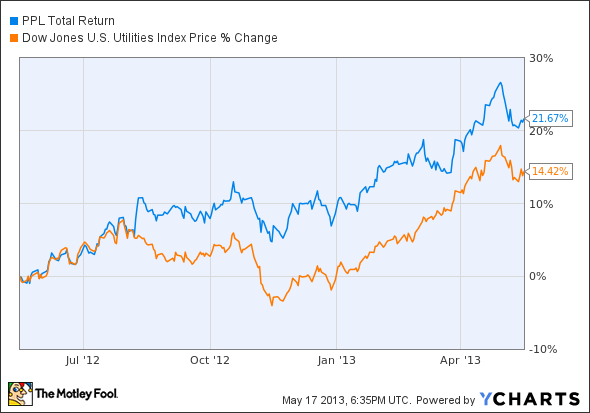 The project is a joint venture with MidAmerican Energy and will run between Laredo and Edinburg, Texas. The regulatory approval includes a settlement sweep of more than 100 landowners, as well as the Texas Parks and Wildlife Department.

AEP Industries (NASDAQ:AEPI) is no stranger to transmission. Its current network includes 40,000 miles of lines, “more than all other U.S. transmission systems combined.” Construction is set for 2014, with an estimated 2016 completion.

Foreigners finance LNG exports
LNG exports are heating up in the U.S., and foreign investors want their own piece of the profit pie. Sempra Energy (NYSE:SRE) announced this week that it has signed up three firms (one French, two Japanese) to help finance its proposed $10 billion LNG export facility.