Share Tweet Email
Page 1 of 4
Next >>
On February 22, Kraft Heinz Co (NASDAQ: KHC) shocked investors with a trifecta of bad news in its earnings report: sub-par operating results, a mention of accounting irregularities and a massive impairment of goodwill, and followed up by cutting dividends per share almost 40%. Investors in the company reacted by selling their shares, causing the stock price to drop more than 25% overnight. While Kraft is neither the first, nor will it be the last company, to have a bad quarter, its travails are noteworthy for a simple reason. Significant portions of the stock were held by Berkshire Hathaway (26.7%) and 3G Capital (29%), a Brazil-based private equity group.
Berkshire Hathaway’s lead oracle is Warren Buffett, venerated by some who track his every utterance, and try to imitate his actions. 3G Capital might not have Buffett’s name recognition, but its lead players are viewed as ruthlessly efficient managers, capable of delivering large cost cuts. In fact, their initial joint deal to bring together Heinz and Kraft, two of the biggest names in the food business, was viewed as a master stroke, and given the pedigree of the two investors, guaranteed to succeed. As the promised benefits have failed to materialize, the investors who followed them into the deal seem to view their failure as a betrayal.

The Back Story
You don’t have to like ketchup or processed cheese to know that Kraft and Heinz are part of American culinary history. Heinz, the older of the two companies, traces its history back to 1869, when Henry Heinz started packing and selling horseradish, and after a brief bout of bankruptcy, turned to making 57 varieties of ketchup. After a century of growth and profitability, the company hit a rough patch in the 1990s, and was targeted by activist investor, Nelson Peltz, in 2013. Shortly thereafter, Heinz was acquired by Berkshire Hathaway and 3G Capital for $23 billion, becoming a private company.
Kraft started life as a cheese company in 1903, and over the next century, it expanded first into other dairy products, and then widened its repertoire to includes other processed foods. In 1981, it merged with Dart Industries, maker of Duracell batteries and Tupperware, before it was acquired by Philip Morris in 1988. After a series of convulsions, where parts of it were sold and rest merged with Nabisco, Kraft was spun off by Philip Morris (renamed Altria), and targeted by Nelson Peltz (yes, the same gentleman) in 2008. Through all the mergers, divestitures and spin offs, managers made promises of synergy and new beginnings, deal makers made money, but little of substance actually changed in the products.
In 2015, the two companies were brought together, with Berkshire Hathaway and 3G playing both match makers and deal funders, as Kraft Heinz, and the merger was completed in July 2015. At the time of the deal, there was unbridled enthusiasm on the part of investors and market observers, and part of the unquestioning acceptance that the new company would become a force in the global food business was the pedigree of the main investors. In the years since the merger, though, the company has had trouble delivering on expectations of revenue growth and cost cutting: 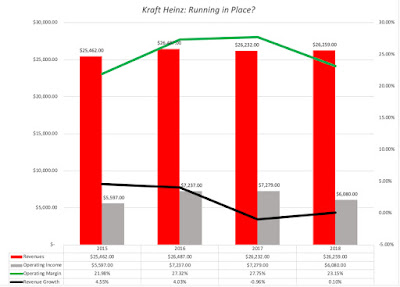 The bottom line is that while much was promised in terms of revenue growth, from expanding its global footprint, and increased margins, from cost cutting, at the time of the deal, the numbers tell a different story. In fact, if investors were surprised by the low growth and declining margins in the most recent earnings report, they should not have been, since this has been a long, slow bleed.