In spite of various problems, such as weak demand and an uncertain environment, there were some surprises last quarter. There were some companies that did exceptionally well. One such company was The Kroger Co. (NYSE:KR), which posted a shining quarter. It not only beat analysts’ expectations, but also gave some pointers which can take the stock higher. Let’s check them out.

Kroger is one those companies which keeps customer satisfaction as the most important aspect while formulating business strategies. In fact, this philosophy is the major driver behind Kroger’s exceptional performance, and this quarter was no exception. Its revenue grew 13% to $24.2 billion over last year’s fourth quarter. All thanks to various efforts made by the company in order to improve customers’ experience.

The Kroger Co. (NYSE:KR)’s customer loyalty program, wherein regular customers get discounts on the basis of past purchases made, has played a very important role. This has not only helped Kroger, but many other companies such as Safeway Inc. (NYSE:SWY). Even Safeway introduced a similar program in order to attract customers to its stores.

The positive effect of Safeway’s “Just for U” program was evident in its fourth-quarter results, which beat analysts’ expectations. 45% of Safeway Inc. (NYSE:SWY)’s revenue came from customers who were registered for its loyalty program.

However, Kroger went a step ahead and took initiatives to reduce customers’ waiting time at the checkout lanes. Also, its great expense control strategies helped earnings surge 22% over last year.

The Cincinnati-based grocer has also increased the number of private label offerings, which lured more customers and helped in widening its margins.

Also, The Kroger Co. (NYSE:KR) expanded its organic and natural food products which boosted its top line. Organic foods have been particularly popular among health conscious people and have helped a number of companies to stir demand.

Moreover, having gas stations at most of its grocery chains has been quite helpful, as customers end up making their purchases from the grocer while buying fuel.

Kroger faces stiff competition from retailers such as Wal-Mart Stores, Inc. (NYSE:WMT), which provide huge discounts and have a wide presence to serve the daily needs of customers. Also, Wal-Mart’s growing online operations have been remarkable. However, The Kroger Co. (NYSE:KR) has managed to perform better than its rival in terms of providing returns to investors. The one year stock price performance of Kroger and its rivals, Wal-Mart and Safeway Inc. (NYSE:SWY), is shown in the chart below: 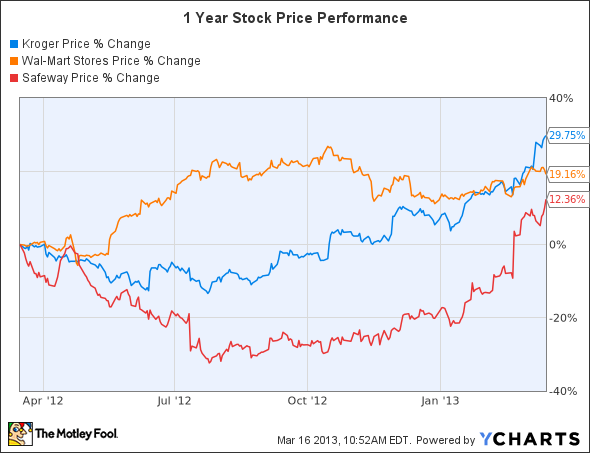 In spite of an amazing distribution network, attractive pricing, and a growing number of neighborhood stores, Wal-Mart’s stock price appreciation could not match up to that of Kroger. This is mainly because Wal-Mart works on attracting customers, but Kroger goes a step further and works on delighting the customers which keeps the customers loyal to its stores.